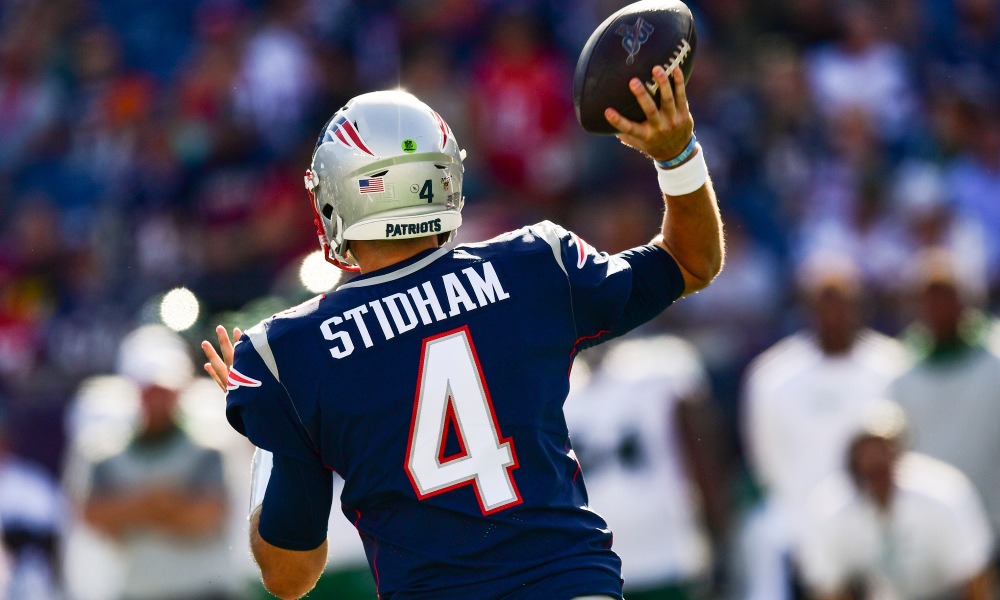 Ever since being drafted in 2019, the media hasn’t had the confidence in Jarrett Stidham that New England’s staff seems to have. In fact, multiple NFL analysts and fans have strongly disagreed with Bill Belichick’s decision not to pursue legitimate QB competition this off-season, and are already putting the Patriots near the bottom of the division now with Stidham being the main reason why.

Now with Tom Brady’s departure from the most dominant organization in sports of the last 20 years, Jarrett Stidham looks like he’ll have full control of New England’s quarterback room in 2020 despite what the rest of the world thinks.

Stidham was seen as a 1st round talent if he would have declared for the draft a year earlier, but instead saw his numbers and stock drop after both of his starting receivers went down with season-ending injuries in 2018. The former Auburn QB’s near 4:1 TD to INT ratio in college shows he definitely has the talent along with the intangibles to play at the highest level.

“Stid really worked hard last year,” Bill Belichick said about the second year quarterback on NFL Network, “He was our backup quarterback the entire season, and I know he’s working hard in the off-season. I know he’s made a lot of progress in terms of understanding our offense and understanding opponents defenses… I’m sure he will get out there and be ready to go, be prepared, compete hard, and we’ll see where it takes us.”

The Patriots definitely had chances to address the Quarterback position throughout this off-season, but chose not to make any drastic additions. With competitive veterans such as Cam Newton or Andy Dalton still looking for work, the Patriots instead opted to sign 34 year old Brian Hoyer who will come in on day 1 already knowing the playbook. They instead chose to load up the roster with young talent during and after the draft while quietly making moves to improve their offense too. Adding veteran wideout Marquise Lee along with 8 rookie pass catchers, including their two 3rd round selections used on Tight Ends, will give them the much-needed playmakers for Stidham and the offense to surprise in 2020 and beyond.

There are a lot of questions yet to be answered for this Patriots team, going into a season without the legendary Tom Brady at Quarterback for the first time in almost two decades. With that, Stidham might be the NFL’s biggest unknown after a 2019 season in which he threw just 4 passes during the regular season.

The thought of Stidham as the guy who replaces Tom Brady should excite fans though. He’s been praised his entire career, dating back to high school when Bleacher Report called him “The King of Friday Night Lights in Texas”, Stidham has always shined with the lights on him.

Patriots star cornerback and reigning NFL DPOY Stephon Gilmore is also a believer in the second year pro, praising Stidham and explaining how good Stidham was when he stepped in to run the first-team offense last year in practice while Brady was hurt. “He came in and worked hard and got better and better as the year went on. He has a strong arm.” Gilmore told ESPN’s Mike Reiss.

“He makes some tough throws. Definitely made it hard on me in practice each and every week, going against whoever I was covering, making some great throws. It allowed me to get better in practice to prepare for the games.”

While Stidham might not be the next Tom Brady in New England, it’s ridiculous to not expect the Patriots to be a playoff caliber team this season. The talent is there, they have the greatest coach the NFL has ever seen. Jarrett Stidham was always a part of the plan in New England, and now it’ll be his time to show the world why.