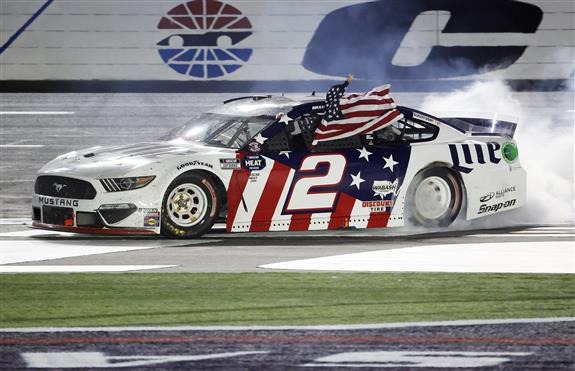 The longest race of the NASCAR season was a little bit longer yesterday as the 400 lap, 600 mile race needed overtime to determine a winner as Brad Keselowski took the checkered flag in Charlotte late Sunday night. For those of you unfamiliar with “overtime” in NASCAR, ESPN has a full explanation of the rules. In short, if the the race is under caution going into the final lap, the race can be extended beyond its initial distance to help determine a winner.

The restart on lap 404 allowed Keselowski to move out in front of the field, crossing the finish line .293 seconds before Jimmy Johnson to take the checkered flag.

CONCORD, NORTH CAROLINA – MAY 24: Jimmie Johnson, driver of the #48 Ally Patriotic Chevrolet, stands on the grid during qualifying for the NASCAR Cup Series Coca-Cola 600 at Charlotte Motor Speedway on May 24, 2020 in Concord, North Carolina. (Chris Graythen | Getty Images)

Johnson was later disqualified from the race and given a last place finish after his car failed a post race inspection.

Chase Daniel was moved up to a second place finish with the Johnson DQ after finishing third with the final restart. Daniel was leading the race but made a late pit stop under caution on lap 398 after his teammate William Byron spun out with a flat tire near the start/finish line. The pit stop put Daniel in 11th for the restart and he was able to move up into third with the new tires as many cars gambled on their older tires (Keselowski included) for the end of the race.

This was the second race in a row that Chase Daniel near the front late in a race, as he was runing second with a chance at the win in Darlington last Wednesday when he was bumped by Kyle Busch and knocking Daniel out of the race.

The next NASCAR race is again at the Charlotte Raceway for the Alsco Uniforms 500 on Wednesday, May 27th.