Baseball is back! We finally have a structure to begin analyzing and predicting each team’s chamionship potential. The geographically weighted schedule will add intrigue, especially to fierce rivalries. The margin for error will be extremely slim. Luckily, nobody is strategically better as an organization than the Tampa Bay Rays. Though their decisions are generally made with regard to percentages of large sample sizes, their core principles combined with their talent and depth make them a legitimate World Series contender.

Many theories will be discussed about what will prevail in Major League Baseball’s sixty game season. Will superstar hitters show their strength? Maybe a truncated year of the pitcher? Could a champion be crowned with pure luck on its side? Superior talent likely will prevail. It would still be foolish to pick Detroit or Miami to win a championship in 2020. The Rays, however, brought the American League champion Houston Astros to the brink of elimination during the 2019 playoffs. They have the deepest pitching staff in baseball and an offense built for marginal gains and platoon matchups.

Dan Szymborski’s ZIPS projection system predicts the Rays to ride an easy schedule, 7th-easiest in MLB, to the top wild card spot in the American League. They could be even more dangerous than that. Any lengthy slip up from the New York Yankees could see the Rays sneak away with an AL East crown. This part of our roster preview will examine a pitching staff that may be baseball’s best.

The Rays arguably have the most talented pitching staff in baseball. They certainly have the deepest pitching staff in baseball. Mainstream fans and analysts chided their opener strategy when they introduced it in mid-2018. It is now considered revolutionary. However, if the Rays decided to line up a traditional five man rotation, it would line up wth the best of them:

That front five rivals any in the Majors as the best. Morton’s consistency, demeanor, and devastating curveball make him a legitimate ace. The health of Snell and Glasnow will be key as they only combined for 35 starts in the 2019 regular season. There is some thought that Snell’s future production is due for some positive regression. His peripherals were far better than his surface numbers last season. His occasional struggles were mostly due to an uncharacteristic spike in home run rate and Batting Average on Balls In Play (BABIP). Glasnow bookended a lengthy midseason forearm injury with dominating performances. The tall righty’s change to a heavy fastball-curveball approach paid dividends immediately, which stands in contrast to the sinkerball approach he adopted in Pittsburgh.

The front three in the rotation are as good as any in baseball. However, their depth puts them in the argument as the best staff. Yonny Chirinos has terrific movement in his arsenal. He is absolutely devastating when ahead in the count. Yarborough has excelled as both a starter and a “bulk” guy, the pitcher who traditionally follows the opener’s early appearance. His soft-tossing approach is contrary to the Rays’ overall approach, but he throws strikes and locates very well. He compares to former White Sox lefty Mark Buehrle as a fast-paced, deceptive southpaw. Major League depth options include Brendan McKay, Jalen Beeks, Trevor Richards, and Anthony Banda provide a variety of effective options, with McKay boasting the highest ceiling. Top prospects like Brent Honeywell and 2019 Rays Minor League Pitcher of the Year Joe Ryan will also likely be on the 60-man squad that will be put together for the 2020 season.

The Rays have a traditional rotation that rivals the best in baseball. If they follow the lead of others, they could opt for a six-man rotation and succeed as well. Their success will almost certainly coincide with the health and success of their aces. However, Tampa Bay is likely to stick with what has succeeded in the past, with a few minor tweaks. That means the strategic innovation with the rest of the staff never stops.

Gone are the days when pitching staffs consisted of just starters, closers, and a handful of journeyman rag arms. Depth is critical and every inning matters. The Rays boast the deepest pitching staff in the league due to their plethora of high quality, and high velocity, arms:

Anderson was arguably the best reliever in baseball after the Rays acquired him midseason last year. Castillo is a high-octane arm who has experience opening games. Drake’s split-changeup makes him a nightmare at times. Poche is young and quite deceptive even though his fastball sits around 91 MPH. Alvarado is talented enough for teammates to love and just wild enough for batters to hate. Roe has an effective breaking ball the sweeps out of his six-foot seven-inch frame. McKay and Beeks also serve as good young depth, with Beeks often serving as a bulk arm like Ryan Yarborough.

There are likely at least four more arms who could crack this list for various reasons. Talented options like Peter Fairbanks and Andrew Kittredge await consistency and opportunity. They both, however, fit the style of pitcher that the Rays look for nowadays. They will almost certainly get some big outs as every individual out and inning will matter more in a sixty game season. The trades of quality producers like 2019 closer Emilio Pagan and the league’s most famous opener Ryne Stanek prove that Tampa Bay is always adjusting. Several of these “relievers” actually started games last year, albeit in short stints, which showcases their talent and versatility.  That strategic innovation will be a big reason for the staff’s success. 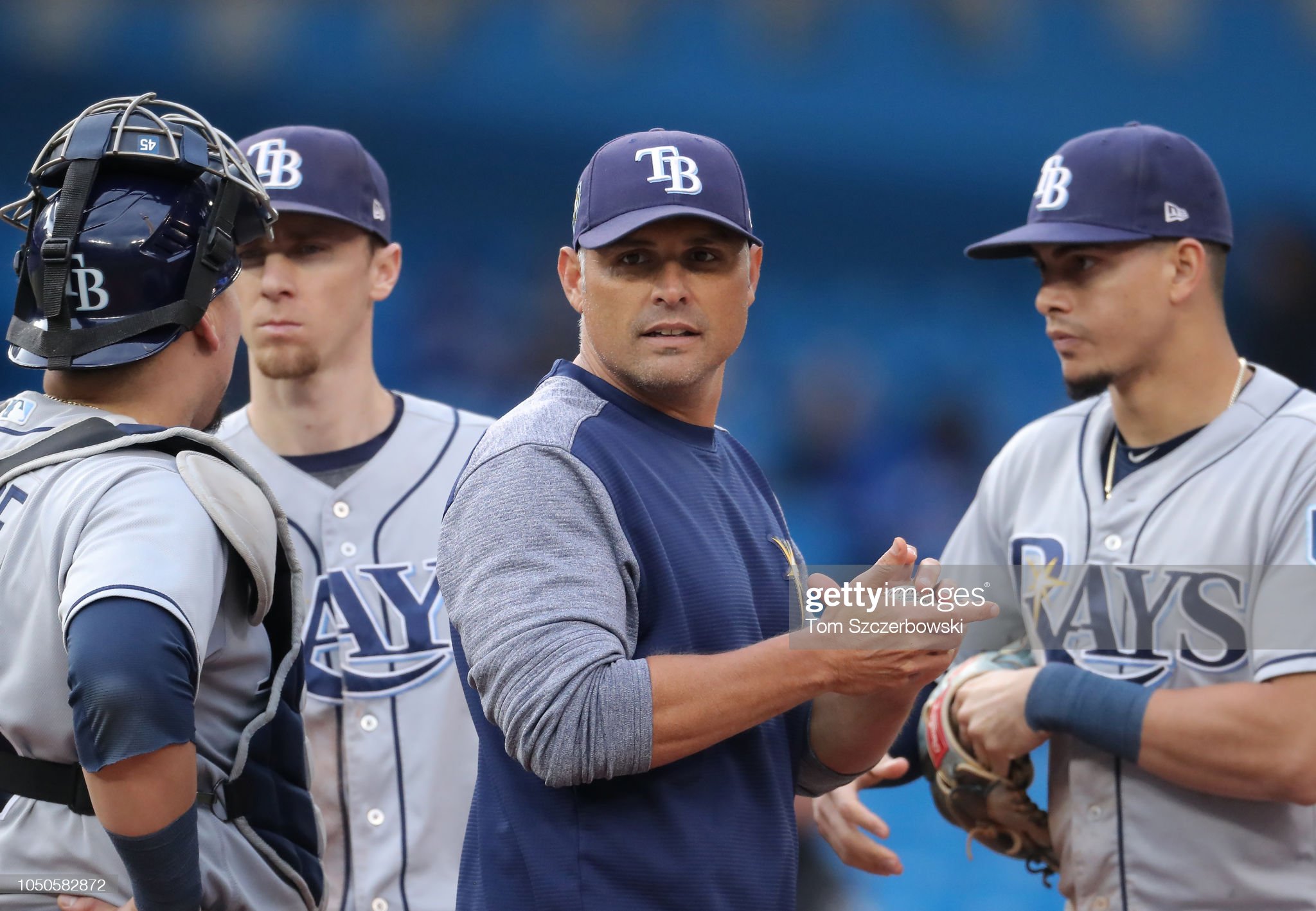 The Rays, without question, have enough quality arms to win a World Series. This staff is likely better than those from the halcyon days of James Shields and David Price. Including those who have since departed, the 2019 team production can be explained through several statistics and rankings:

So what does it all mean? Of course these guys pitch well and produce. But the Rays always create production that is greater than the sum of their parts. They don’t believe that high leverage innings are exclusive to the final two innings. The highest scoring inning of all time is actually the first. So why do traditionalists sneer at the Rays innovative flexbility? Probably some combination of small market bias and the complex numerical basis of implementing such strategies.

The shortened 2020 schedule will be less conducive to the familiarity and rhythm. One-third of Tampa Bay’s schedule will be played against the NL East, who aren’t particulalrly familiar with their interleague counterparts. That number would hover around ten percent in a normal year. High leverage situations will be more important than ever. The Rays are comfortable navigating these situations during normal years.

There is also the logistical issue of getting pitchers ready for the season. The shutdown of spring training sites means that pitchers will only be prepared with three weeks of workouts and simulated games as opposed to the six weeks of traditional buildup. Teams are generally cautious with pitch counts and innings accrued through April. Risking pitcher injuries means risking them for 2021 as well. The Rays are used allowing pitchers to blaze through lineups once or twice and then relieve them as scheduled. The’ve been doing this for years. Their depth is advantageous. In fact, the Yankees are the only team on the Rays’ 2020 schedule with a top ten bullpen in 2019. Consider the opponents and their MLB rank in bullpen ERA:

Some of these teams have excellent rotations like the Yankees, Mets, and Nationals. The Nationals are an interesting case because their bullpen nearly sunk their season. They were 19-31 through fifty games. But a 162 game season allows them time for the rotation to settle in and dominate through the postseason. What if they aren’t afforded that chance this year? The Rays actually had the second-best record among these teams through sixty games last year. Only the Yankees were better.

Certainly there is a smaller margin of error this season. The (hopefully permanent) addition of the designated hitter to the NL will make things slightly harder. Pitcher injury handling will be a prime concern through the opening weeks of the season, especially for teams like the Mets and Yankees who have each already lost an ace to Tommy John surgery. The Rays have the talent, depth, and situational experience to excel in the current scenario. As always, they will assess, adapt, and do something we’ve never seen before. Their army of arms gives them a legitimate title shot.