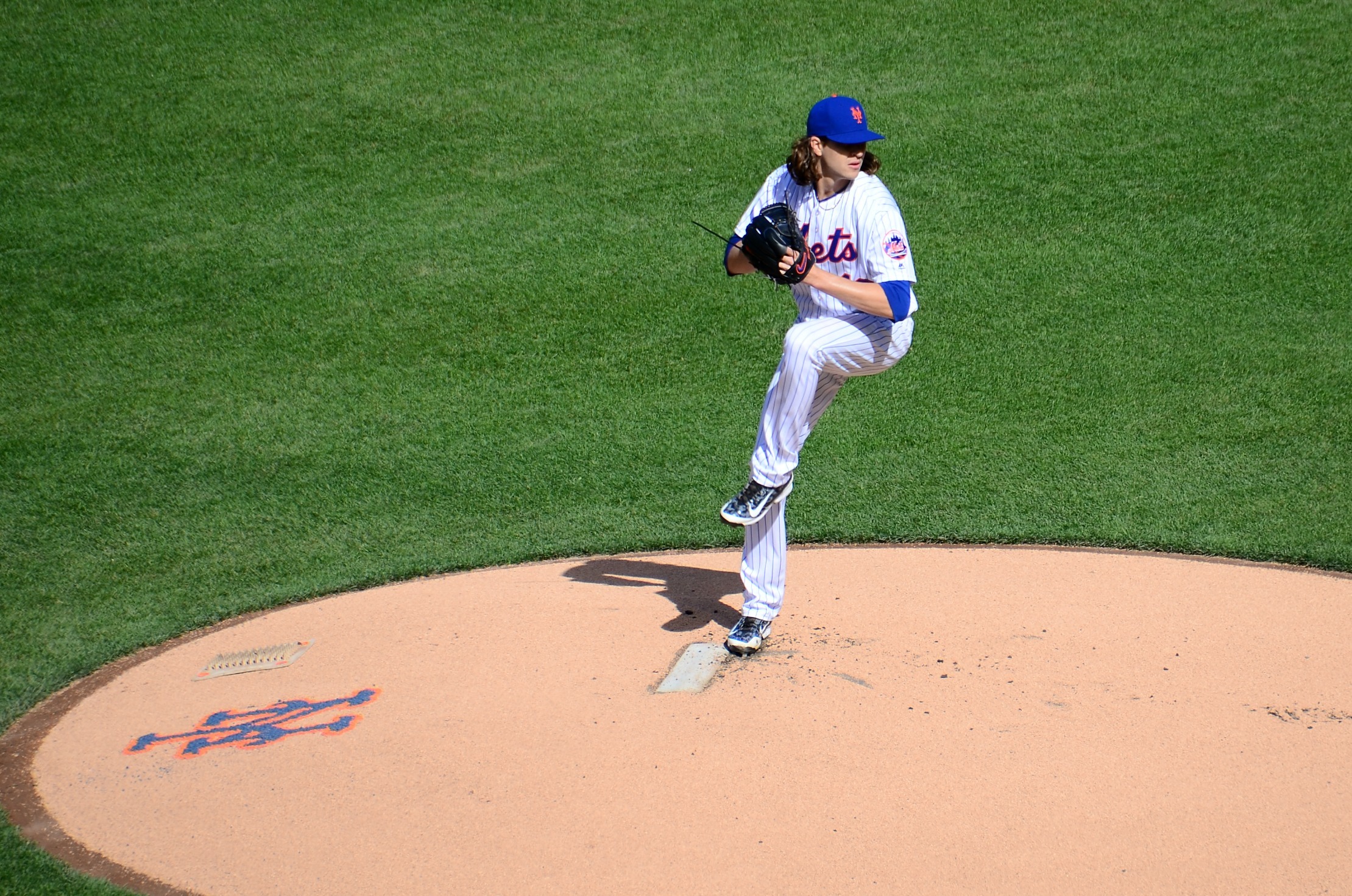 It happens, but not nearly as much as it should. Why is that?

The most prevalent argument is that pitchers play in significantly fewer games than hitters. Starters only pitch once every five days, usually only playing in a max of 30-to-35 games played in a single season. How can someone who plays only a fifth of the season win the MVP over someone who is in the lineup every single day?

Because this narrative severely misrepresents the impact pitchers have on their team’s season.

The truth is the average pitcher has more of an impact in a five-game stretch pitching in just one of those games than the average hitter who started all five. Yes, you read that right, and here’s why.

Even though they only play once every five days, pitchers have a major hand in so much more when they’re in the game than hitters. Every single plate appearance relies on what they do. Hitters meanwhile are only responsible for the handful of times they step to the plate.

Yes, they do also play the field, but it by no means has the same impact on the game as what the pitcher is doing. Every once in a while they’ll help the pitcher out and make a great play, but more often than not they either just stand there while the pitcher strikes the batter out or they make a routine play that the pitcher induced, like catching a lazy fly ball or fielding a ground ball. Even then, that’s if the ball is hit to them and not one of their seven other teammates in the game.

This is very, very, very rough math and doesn’t account for extra-inning games whatsoever, it looks at every game if it lasts nine innings. So, let’s just look at the raw totals — plate appearances vs. batters faced.

In 2019, Marcus Semien led the majors with 747 plate appearances, playing in all 162 games. Trevor Bauer led the majors with 911 batters faced. Lance Lynn was next with 875, followed by Marco Gonzalez with 866 and Mike Minor with 863. To find someone who has the same batters faced as Semien, you have to go down to Robbie Ray at No. 36, who faced 747 batters.

The best pitchers consistently are involved in more plate appearances in a season than the best hitters.

Who cares that pitchers only pitch once every five days, they still do more in a season than hitters.

Then what about the Cy Young Award?

What about it? The MVP is supposed to go to the best player in baseball. What it means to be the best is a hotly debated topic, but that’s a topic for an entirely different article.

Over just the past decade I have picked out about a dozen cases where a pitcher should have either won the MVP award or should have at least been in the conversation. I’m going to go through them all, but easily the most egregious of them came in 2018. Christian Yelich of the Milwaukee Brewers won the NL MVP that year hitting .326/.402/.598 with 36 home runs and 110 RBI in 147 games. He had a fantastic season without a doubt and the writers rewarded him with 29 out of the 30 possible first-place votes. Who got the lone remaining first-place vote you ask?

New York Mets starting pitcher Jacob deGrom. He was never really in the MVP conversation at all that season, as leading up to the awards announcements he wasn’t even considered a lock for the NL Cy Young (he ended up winning it with 29 out of 30 first-place votes).

The Mets were bad. Ending the season 77-85 and seemingly doing worse whenever their ace was on the mound, deGrom finished with a record of 10-9 on the season. I could sit here and lecture you about why pitching wins don’t reflect the quality of the season a pitcher had, but I’m just going to leave it at this — they don’t matter.

That’s not a typo. Even though he got the only other first-place vote, he didn’t get nearly enough other support to put him in the top three.

Pitches and overlays from…. de🐐🏆 pic.twitter.com/D34JIkzTId

Despite having one of the best pitching seasons of the past few decades, 29 of 30 voters didn’t think he was worthy of the MVP. A lot of them clearly didn’t even have him in their top three, which is even more mind-boggling when you take a look at these next stats.

Yelich had an OPS+ of 164, which means he was 64% better than the average hitter. deGrom had an ERA+ of 218, which means he was a full 118% better than the average pitcher. He was just the tenth player to hit that ERA+ mark since 1969, and the first since Greinke in 2015. Oh, and deGrom faced 835 batters while Yelich had 651 plate appearances, so deGrom was responsible for the outcome of significantly more game events than Yelich.

No matter what way you decide to look at it, deGrom was the better player in 2018. He should have won the NL MVP, and he for sure shouldn’t have finished fifth in the voting. Yelich was great, but deGrom was historic.

That absolute pitching brilliance earned him the No. 7 spot in the NL MVP voting, and believe it or not, he didn’t even win the NL Cy Young. Jake Arrieta won that, having his own phenomenal season. I think Greinke was slightly better and the vote was close, but Arrieta and his 1.77 ERA, 0.865 WHIP, 215 OPS+ and 8.6 WAR nudged out the victory. At least it was close though, something that can’t be said about the MVP race where Harper took home all 30 first-place votes. I probably wouldn’t have voted Greinke for MVP at the time and looking back on it Harper still deserves the award, but there’s no reason for Greinke to finish No. 7 and Arrieta No. 6.

As for the other years in the past decade pitchers either got robbed or should have at least gotten more respect, I’ll run through them.

2010
Felix Hernandez had the fifth-highest WAR in the AL but finished No. 16 in the MVP voting. His 2.27 ERA, 1.057 WHIP and 174 ERA+ put him directly behind Alex Rodriguez who hit .270/.341/.506 with a WAR of 4.2 and OPS+ of 123. Hernandez pitched 249.2 innings and faced 1,001 batters while Rodriguez had 595 plate appearances. He probably shouldn’t have won the award, but his absolute brilliance on the mound while also being a complete workhorse should have at least earned him a top-three nod along with the AL Cy Young, which he did win.

2011
This could have been the first year since 1968 two pitchers won the MVP award. Justin Verlander rightfully won it in the AL, and you can make a pretty good argument for one of Clayton Kershaw, Roy Halladay or Cliff Lee winning it in the NL. Kershaw won the Cy Young award despite having a WAR 1.6 lower than Lee and 1.2 lower than Halladay, but I don’t really have a problem with that. WAR shouldn’t be the end all be all, Kershaw had the lowest ERA and was right in the middle of the two Phillies in ERA+. They each faced over 900 batters while Ryan Braun, who won the MVP, had 685 plate appearances. His WAR was also lower than Lee, Halladay and second-place finisher Matt Kemp. Should one of the pitchers have won the MVP? I’m not sure honestly, it’s very close, but if they did I wouldn’t have any complaints. Either way though, there’s no way Halladay, Kershaw and Lee should have finished No.’s 9, 12 and 15 respectively.

2014
There were multiple players in 2014 that probably shouldn’t have won the award but shouldn’t have finished nearly as low as they did. In the AL, despite having the highest WAR in the league, Corey Kluber finished No. 11 in MVP voting. Felix Hernandez, who led the AL in ERA, finished No. 10 in MVP voting. Chris Sale, who had the highest ERA+ (in over 60 fewer innings than Kluber and Hernandez), didn’t even place. Then in the NL, Kershaw won the MVP but Johnny Cueto, who had the next-best WAR of all players and the next best ERA and ERA+, finished No. 12. For reference, that was right behind Hunter Pence, who had an OPS of .777 and OPS+ of 121. But no, that’s better than Cueto’s 2.25 ERA and 163 ERA+ in 243.2 innings. Totally.

2017
Kluber makes the list once again, this time going against Jose Altuve’s now-tainted win. Kluber is tied with Aaron Judge for the highest WAR in the AL, had a 2.25 ERA, 0.869 WHIP and a 202 ERA+. Personally, I think it’s more impressive than Altuve’s OPS+ of 160 and Judge’s OPS+ of 171, but relatively similar WARs, Altuve’s .346 batting average and Judge’s 52 homers make it interesting. Give the award to Kluber though and I wouldn’t bat an eye. I will bat an eye at him finishing No. 7 in MVP voting, which he did.

This year also brings the first appearance of Mad Max. Scherzer finished the season with the third-highest WAR in the NL, an ERA of 2.51, WHIP of 0.902 and ERA+ of 178. Giancarlo Stanton and his 59 home runs, 132 RBI and 169 OPS+ won the award and it’s hard to argue against him. Still though, Scherzer should have at least been in the running, not finishing No. 10 behind Cody Bellinger who had an OPS+ of 143 in 548 plate appearances while Scherzer faced 780 batters.

2018
We’re back to 2018 to talk about the NL MVP race, but not about deGrom. Even though deGrom should have won the award, his fellow NL East starters and Cy Young podium members Scherzer and Aaron Nola needed some more love. As I mentioned before, deGrom demolished Yelich when it came to WAR, but what I didn’t mention is how Yelich actually was No. 4 overall, behind Scherzer who had a 9.2 and Nola who had a 9.7. Yet somehow, they finished No. 10 and 13 respectively. No.’s 11 and 12 were Anthony Rendon and Ronald Acuna Jr. Rendon put up an OPS of .909 and Acuna had one of .917. Meanwhile, Scherzer had an ERA of 2.53 and Nola one of 2.37. Both of them needed to be top-six at least.

For the 2nd straight year, the @Nationals ace came in 1st in the NL Cy Young Award race. pic.twitter.com/QQk0jbUju0

And finally, we’ve come full circle to Jacob deGrom. While he did win back-to-back Cy Young awards, he should have at least podiumed in back-to-back MVP races. His WAR of 8.2 was second only to MVP winner Cody Bellinger, but he ended up at No. 10, right behind Juan Soto who had a WAR of 4.6. deGrom wasn’t even the highest Met in the voting, with Pete Alonso and his 5.2 WAR finishing No. 7.

What does all of this tell us?

Pitchers have historically been and continue to be disrespected. Despite consistently being involved in more plate appearances than batters, the nature of how they do their job, by pitching once every five games, has created a negative perception of the value they bring their team.

I’m not arguing pitchers should have an advantage over hitters when it comes to MVP voting. I’m arguing the advantage hitters have over pitchers should be removed. The best player should win the award, regardless of the position they play.

If the league wants to make it a hitting only award that’s fine with me, but that’s not the way it is. Pitchers can win. Two have done it this decade. So since there is a precedent for pitchers winning, it’s time more do.