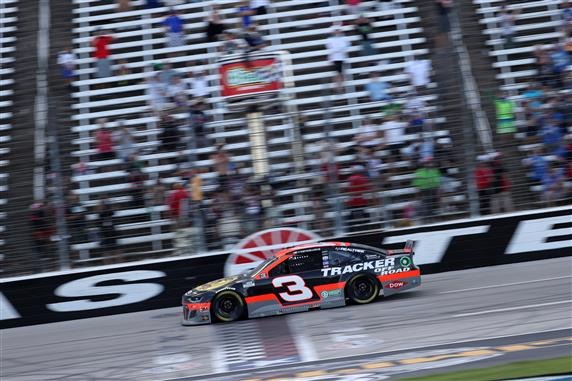 Chris Graythen | Getty Images FORT WORTH, TEXAS - JULY 19: Austin Dillon, driver of the #3 Bass Pro Shops Chevrolet, crosses the finish line to win the NASCAR Cup Series O'Reilly Auto Parts 500 at Texas Motor Speedway on July 19, 2020 in Fort Worth, Texas.
Share
Tweet
Share
Share
Email
Comments
July 19, 2020
NASCAR Wire Service
Austin Dillon held a hard-charging field off three times on restarts in the closing laps to earn his first NASCAR Cup Series victory of the 2020 season in Sunday’s O’Reilly Auto Parts 500 at Texas Motor Speedway. It was a 1-2 finish for the Richard Childress Racing team with Dillon’s rookie teammate Tyler Reddick finishing a mere .149-seconds behind.
Before the Texas green flag, Dillon was 24 points outside the NASCAR Cup Series Playoff top-16 and now the Texas winner has an automatic berth. It’s his third career victory – with other trophies in the 2017 Daytona 500 and NASCAR’s longest race, the 2018 Coca-Cola 600 at Charlotte Motor Speedway – 88 races ago.
Dillon, 30, grandson of NASCAR Hall of Fame team owner Richard Childress, was emotional after the win, screaming “thank yous” into his team radio and then dedicating the victory to his wife Whitney and their one-month old son, Ace, back at home in North Carolina.
“Not bad for a silver spoon kid, right,” Dillon joked after climbing out of his No. 3 RCR Chevrolet, a reference to his upbringing in NASCAR’s brand of royalty.
“Tyler Reddick, he raced me clean. 1-2 for RCR. This has been coming. We’ve had good cars all year. I’ve got my baby Ace back home and my wife and I love them so much. I’m just so happy. Thank God. To tell you the truth, it means a whole lot [to be in the Playoffs] for the family, for all our of partners.”
Team Penske driver Joey Logano finished third, reigning NASCAR Cup Series champion Kyle Busch was fourth, still looking for his first victory of 2020. NASCAR Cup Series points leader Kevin Harvick finished fifth.
Erik Jones, Ryan Blaney, Kurt Busch, Brad Keselowski and Aric Almirola rounded out the top 10.  Blaney led a race-best 150 of the 334 laps and swept the opening two stages, but it marks the second time he’s led at least 100 laps at Texas and didn’t get to collect the trophy.
Blaney and several other of the day’s frontrunners were making their way forward after green flag pit stops when a caution came out with 31 laps remaining for young driver Quinn Houff, who crashed while trying to get to pit lane. That changed the complexion on the race and many of the afternoon’s best cars were then left to play catch-up while Reddick and Dillon were able to pit under caution instead of the green flag as the others had.
“Disappointing finish for sure,” said Blaney, driver of the No. 12 Team Penske Ford. “Dominant car all day, especially on long runs. Really proud of that. Just unfortunate the way it ended for us.”
“I’m proud of the speed we have and I feel like we can compete with the four and the 11 and those guys who have a lot of wins this year,” he added.
Reddick acknowledged the track position was a huge help at the end. And runner-up is a career-best finish for the former two-time NASCAR Xfinity Series champion in the NASCAR Cup Series.
“We had to catch a few breaks,” Reddick said. “Can’t ask for much more than we got there, me and my teammate on the front for the last couple restarts. He’s done this a little longer than I have and I’m a little bit rusty, haven’t been on the front row in a while.
“I just wanted it to be between us, not bring other cars into it and make sure we could fight it out,” Reddick added. “We got the restarts and just kept getting opportunities and couldn’t get it done today. But hats off to the three guys. They work hard and this gets one RCR Chevrolet into the Playoffs. We’re below the cutoff line, so we’ve got to keep fighting. If we can keep running like this, hopefully we won’t have to worry about points.”
With his 11th top-five finish, Harvick now leads the NASCAR Cup Series standings by 91 points over Ryan Blaney in second.
Ten drivers have now clinched Playoff berths with victories leaving six positions open with eight races remaining to set the 16-driver postseason field. The NASCAR Cup Series races next at Kansas Speedway Thursday night (7:30 p.m. ET on NBCSN, MRN and SiriusXM NASCAR Radio).