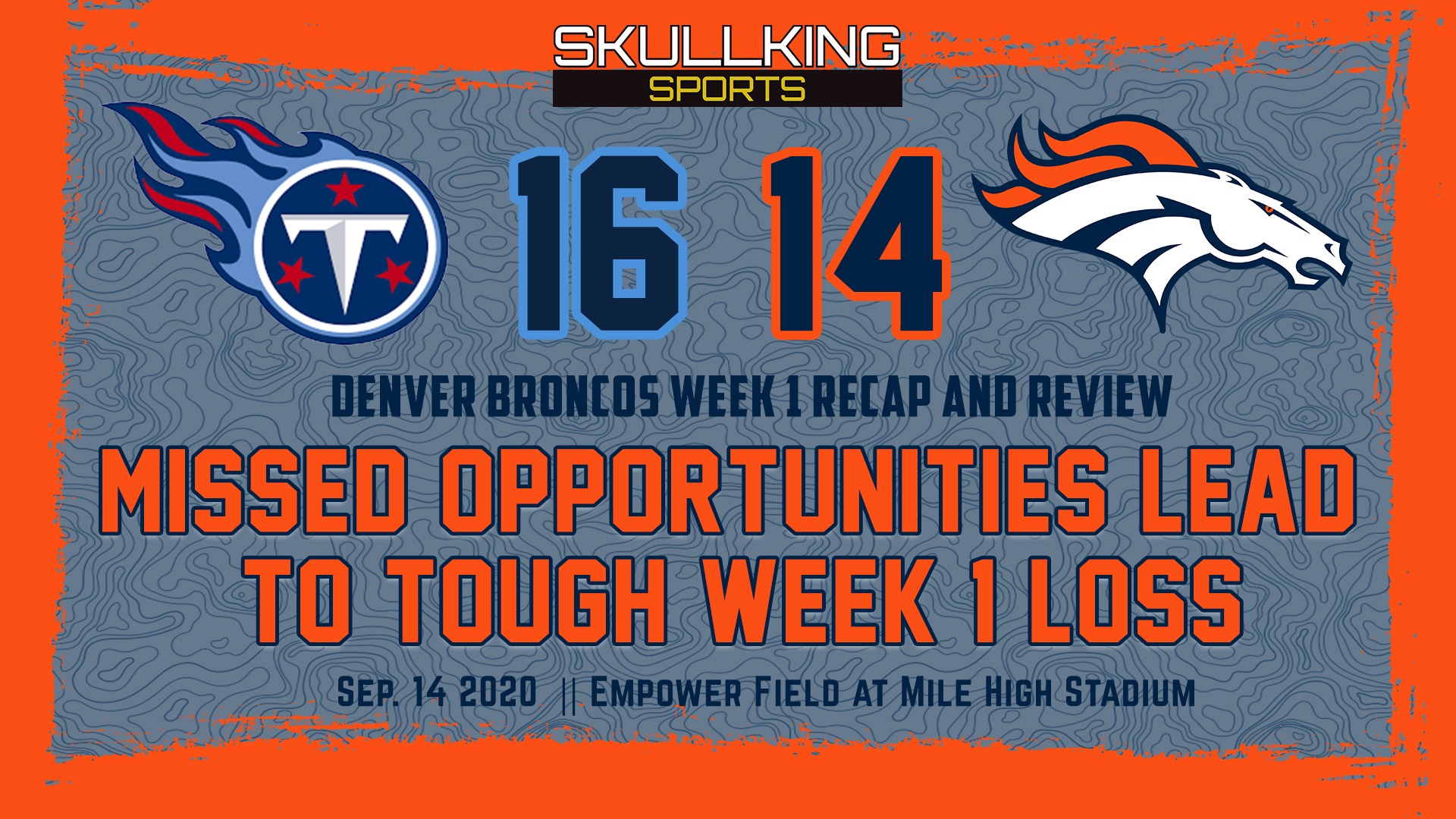 No, Broncos Country, you are not experiencing Deja Vú. The Denver Broncos lost Monday night’s season opener after having the lead with under :30 seconds left in the 4th quarter. The Tennessee Titans leave the Mile High City with a 16-14 victory dropping the Broncos to 0-1 on the unique 2020 season.

Even though The Broncos entered this game without their No. 1 wide receiver in Courtland Sutton (AC Joint Sprain) and future Hall of Famer Von Miller (Dislocated Ankle Tendon), they looked good at the start. They took a 7-0 lead in the first quarter after Drew Lock directed the play while rolling right and threw a strike to Noah Fant in the endzone. All of this came after Stephen Gostkowski missed a 47 yard field goal, which would be his first of three missed field goals.

The Titans did answer in the second quarter after recovering a Melvin Gordon fumble on the Broncos 23 yard line. Ryan Tannehill found MyCole Pruitt from the one yard line and tied up the game 7-7. On the ensuing drive, the Broncos had their own chance to score from the one-yard line but couldn’t cash in on fourth down. Another Gostkowski missed field goal closed the half.

The third quarter was dominated by the Titans. They controlled the clock and tempo the entire quarter. The Broncos only had six plays for three yards(!) in the quarter. While the Titans and Derrick Henry didn’t have one big play, they methodically worked their way down the field. In fact, Henry had as quiet of a night as possible for someone with 113 rushing yards. The 2019 rushing champ only averaged 3.7 yards per carry Monday night.

The Titans started the fourth quarter off with a touchdown to take a 13-7 lead after a Gostowksi missed PAT. Tannehill threw his second touchdown from the one yard line when he found Jonnu Smith, on what looked like a rare blown coverage from Justin Simmons. The Broncos responded on their next possession driving 75 yards highlighted by a big play from rookie Jerry Jeudy. Gordon plowed his way into the endzone to give the Broncos a 14-13 lead with 9:08 left in the fourth quarter. After trading punts for the next four possessions, Gostkowski finally made his first kick of the night – a 25 yard field goal to give the Titans a 16-14 lead with :17 seconds left. Prior to the kick, the Broncos let the clock run down and decided to save their three timeouts for the after-game party. In a very questionable coaching decision, Vic Fangio didn’t use a timeout until there were :2 seconds left in the game and the Broncos needed a miracle. More on the timeout situation below.

There is a lot to unpack here. In a game the Broncos should have won, they regressed to their 2019 selves and missed opportunities. Here’s where we take a deep dive into my 10 main takeaways from Monday night’s tough loss.

Overall, I think there are some positives in this game that the Broncos can build upon, but they need to right the ship quickly if they want to keep their heads above water. However, I don’t think we are in panic mode. We’ll find out a lot about this team following next week’s game vs the Pittsburg Steelers. Let me know what you think of the week 1 loss to the Titans, what you’re looking for next week against the Steelers, and anything else I may have missed over on Twitter @gardensportz