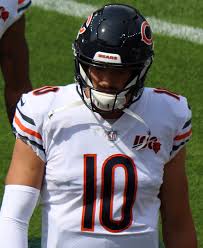 The Bears had a wild game in Week 3 against the Atlanta Falcons including multiple different headlines.
The biggest news is the benching of Mitchell Trubisky, following his first drive INT in the second half. Trubisky was struggling against the Falcons (13/22 for 128 yards, 1 TD, and 1 INT), and the Bears were down 23-10 when they made the change and Nick Foles took over.
Foles went on to throw for 188 yards, 3 TD’s and 1 INT on 16/29 throws in one half and also threw 2 TD’s that were both overturned. The INT on Foles’ first drive was a crucial call made by the refs and didn’t seem to have any concrete reason to overturning. The jump ball to Allen Robinson in the corner of the end zone was caught by Robinson at first and while him and Darqueze Dennard were falling to the ground, Dennard popped up with the ball. The refs called the play a TD as the ruling on the field, but was going to be reviewed. The replay never showed Dennard clearly coming up with the ball before Robinson’s shoulder touches the ground and normally the call on the field will stand if there is no clear evidence of a change, but the call was reversed and the Falcons got the ball back. An unfortunate call could’ve resulted as an even bigger game for Nick Foles and Allen Robinson (who finished with 10 receptions for 123 yards and 1 TD), but that wasn’t the case. Here is the controversial play.

Foles actually threw ANOTHER touchdown to Anthony Miller on 4th and goal from the ATL 17, but the play was overturned again because Miller didn’t successfully catch the ball. So the Bears missed out again and were losing hope as the clock was winding down in the fourth quarter.

But Foles went on to throw 3 TD’s in 4 minutes and brought the Bears all the way back from a 26-10 deficit going into the 4th quarter. His first TD was a 3-yard pass to Jimmy Graham, his second was a 37-yard pass to Allen Robinson where Robinson broke two tackles and outran the rest of the defense, and his third TD pass was the game winner to Anthony Miller for 28 yards.

The Bears defense held onto the lead and the win after Tashaun Gipson’s game-sealing interception.

Matt Nagy announced that Tarik Cohen has torn his ACL and will be placed on season-ending injured reserve, and
Nagy also made the decision that Nick Foles will start Week 4 against the Colts (2-1).