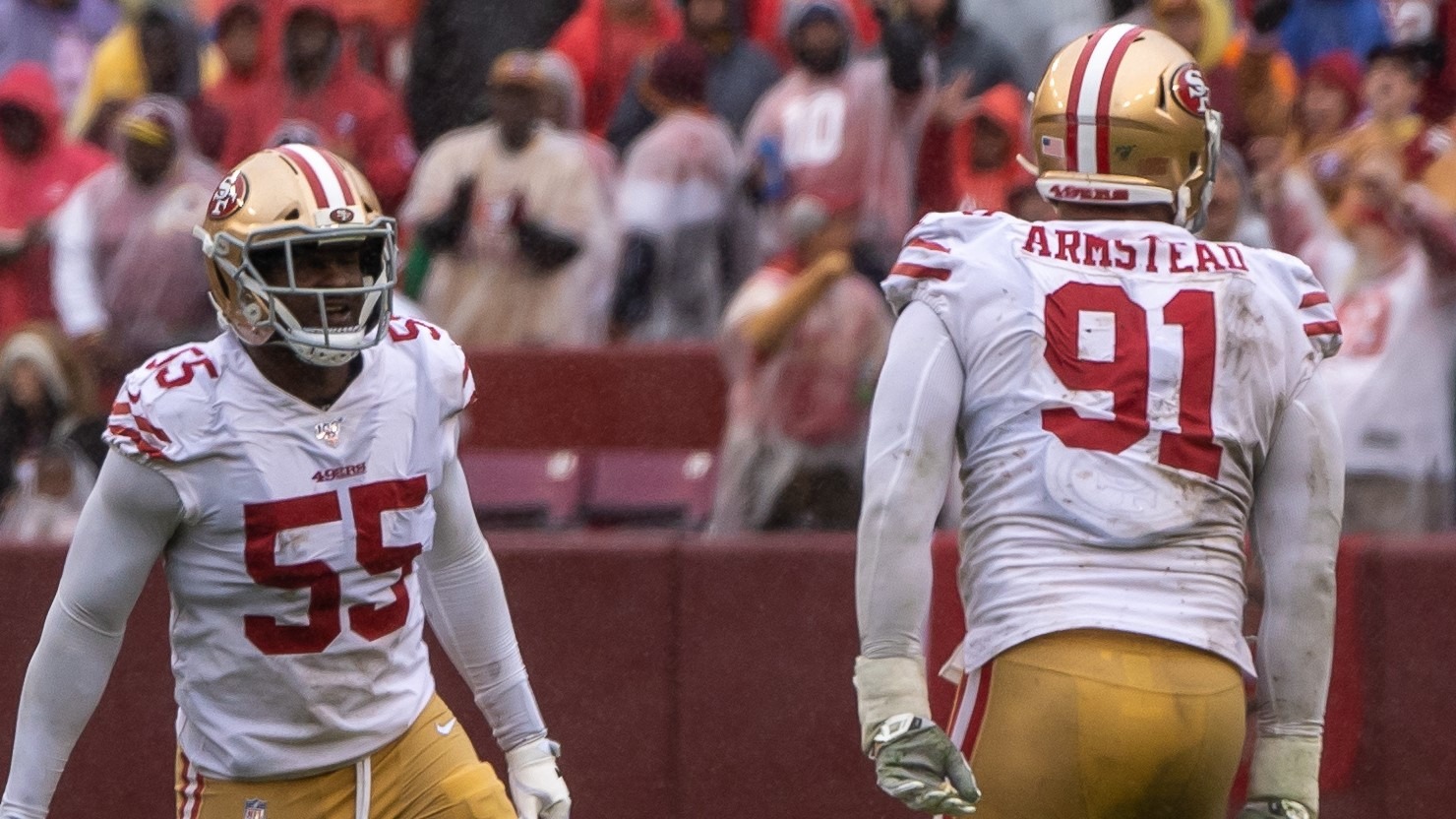 The 49ers (2-2) dropped their Sunday night matchup against the Philadelphia Eagles (1-2-1), 25-20, despite a strong performance from defensive coordinator Robert Saleh’s unit. San Francisco’s defense pressured Eagles quarterback Carson Wentz all night, producing an interception and multiple sacks, but its injury-plagued offense couldn’t finish it out.

Here’s how the 49ers successfully pressured Wentz in the loss:

On Wentz’s early interception, defensive end Arik Armstead gets close to Wentz on the outside, forcing him into pressure from Kerry Hyder Jr. and Javon Kinlaw.

On an early INT, Armstead gets in Wentz’s face from the outside, forcing him into Hyder Jr. and then Kinlaw, who are relentless in their pressure.

Wentz gets a throw off, but it’s deflected and snagged by Al-Shaair. Sometimes, a tenacious rush can produce better than a sack. pic.twitter.com/W9WPQ7WrSf

Wentz’s throw is batted before being picked off by linebacker Azeez Al-Shaair, an even better result than a sack.

When defensive linemen go nonstop in their pass rush and stick with the play, as San Francisco’s unit did here, plays like this are bound to happen eventually.

Successfully-timed blitzes can lead to optimal matchups and sacks, as evidenced by a specific play Sunday night.

San Francisco linebacker Fred Warner plays contain on the outside, and Miles Sanders is essentially forced into a double-team from Warner and D.J. Jones, who comes on a stunt.

This is exactly what you want from a blitz. Fred Warner plays contain on the outside, essentially double-teaming already-weak protection of RB and allowing Jones to get inside on a stunt and sack Wentz. pic.twitter.com/nbekx4nMgs

That’s way too much for a running back to handle in protection, and Jones sacks Wentz, producing a highlight moment for the 49ers.

CB blitz leads to another sack

Saleh calls another strong blitz later in the game, leading to another sack on Wentz.

San Francisco nickel cornerback Jamar Taylor comes from the outside, and Dion Jordan runs a stunt to the inside. It’s enough, and they collapse on Wentz at about the same time.

Another example of an effective blitz. Nickel CB Jamar Taylor + Dion Jordan (on a stunt) collapse on Wentz from two different angles. Doesn’t get better than that; stunt + DB blitz combo can easily confuse and disrupt an offensive line. pic.twitter.com/b2x5lz4keA

Mixtures of exotic blitzes and stunts are perfect to confuse an offensive line, disrupting pass protection and leading to plays such as this.

Rolling with the rollout

Late in the game, when the 49ers desperately needed a stop, Saleh’s unit got them one.

On a third-and-9, Wentz rolls out, a call likely made to avoid San Francisco’s pressure. The 49ers play it perfectly, though, sliding with the rollout and allowing Armstead and Hyder to trap and sack Wentz.

.@49ers needed this one. Late in the game, Wentz rolls out (likely to avoid pressure), but D line + linebackers shift with it as play goes. Armstead and Hyder make quick work of this one. pic.twitter.com/UyAvYhw5OF

Saleh called a great game on Sunday against Philadelphia, which may be overshadowed by the 49ers disappointing loss. It does bode well for the rest of the season, though, that San Francisco knows how to dial up pressure and disrupt talented quarterbacks such as Wentz.

Robert Saleh is such a great coordinator and deserves to be a head coach. His unit combines great scheme + execution.

It’s too bad SF’s battered offense couldn’t finish out and give its defense the win. #TapeWithTWom