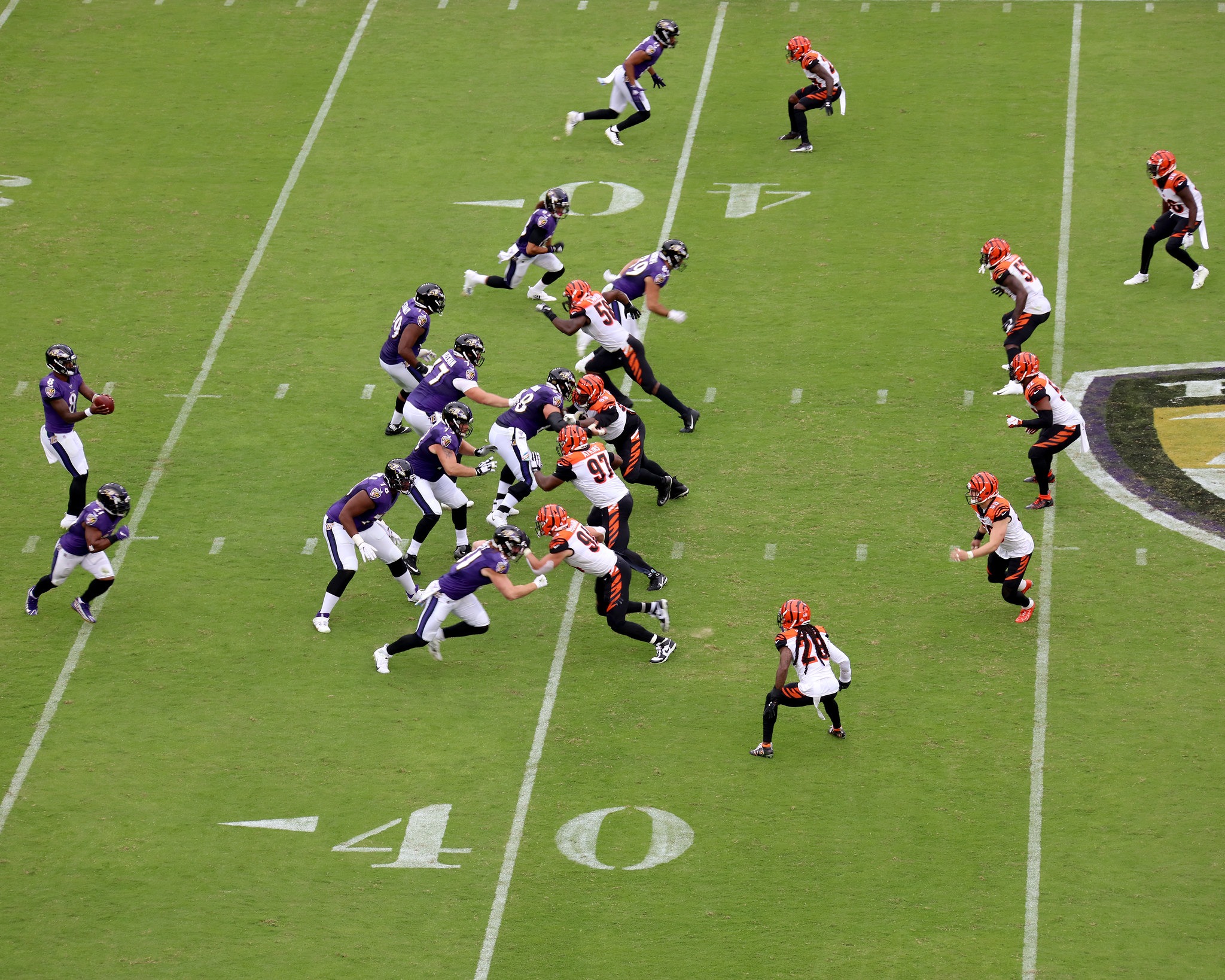 Defense galore was the name of the game for the Ravens as they steam-rolled Joe Burrow and the Bengals 27-3. Coming off of a solid performance against Washington last Sunday, the Ravens defense made it very clear they are one of the best units in the league. But how did the Ravens fair overall in the highly anticipated first meeting between Lamar Jackson and Joe Burrow? Time to take a look…

Going into this game, I expected the Ravens offense to have a highly productive day similar to how they played Week 1 against the Browns. The Bengals defense is one of the worst in the league and Lamar Jackson should have had a MVP-caliber day, but it was not to be despite the win. Jackson went 19/37 with 180 passing yards, 2 touchdowns, 1 interception, and an astonishing 3 rushing yards. The Bengals defense successfully neutralized Jackson’s running game which kept him in the pocket and forced him to throw. Similarly to the past few weeks, Jackson’s throwing accuracy has been off and this is now becoming concerning since the Ravens running game hasn’t been as effective as last year. There were multiple dropped interceptions too; meaning this game could have gotten ugly against a better team. Jackson needs to improve his passing starting next week if the Ravens are going to bring back their highly dynamic 2019 offense.

The Ravens rushing attack was solid, as usual, besides Jackson’s surprising inability to find room. Mark Ingram led the way with 11 rushes for 57 yards followed by Gus Edwards who had 7 rushes for 25 yards. Devin Duvernay and J.K. Dobbins had a rush apiece for huge gains. While the rushing attack did not score, it was highly satisfying to see the Ravens get back to rushing the ball hard downfield.

The receiving core had a good day especially after the numerous dropped passes against the Chiefs in Week 3. Marquise Brown had a huge comeback with 6 receptions for 77 yards and 1 touchdown. Continuing his success from last week, Mark Andrews caught 6 for 56 yards and 1 touchdown. Other than these two receivers, no one else really got involved besides a catch or two for Dobbins, Duvernay, Ricard, and Boyle. The Ravens need to get all of their receivers involved as they did in Week 1 and 2 to keep defenses on edge.

This was perhaps one of the best defensive showings in recent memory, which is impressive because this is the Ravens we’re talking about. Every aspect of the D was on-point. The line was unstoppable holding Joe Mixon to 59 yards and sacking Burrow 7 times with 15 QB hits. The Ravens’ linebackers and secondary were near perfect holding the so-far explosive Burrow to 183 passing yards. Turnovers were easy to come by as well with 1 interception, 3 fumbles, and a fumble returned for a touchdown.

Patrick Queen had his most impressive outing with 9 total tackles, 1 sack, 1 QB hit, 1 forced fumble, 2 fumble recoveries, and a touchdown. Marcus Peters and Marlon Humphrey had the receiving core on lockdown while the line was harassing Burrow. Every member of this Ravens defense contributed to a near shutout which is outstanding to see moving forward.

Overall, there are tons of positives and some negatives to take away from this game. Even though the Bengals are not yet a formidable opponent, the Ravens defense had an A+ day leading the team to a victory. There is definitely room for improvement on the offensive side of the ball, especially for Lamar Jackson, but they scored nonetheless. If the defense maintains its level of play and the offense finds more consistency, the Ravens should be just fine in their Week 6 matchup against the Eagles.