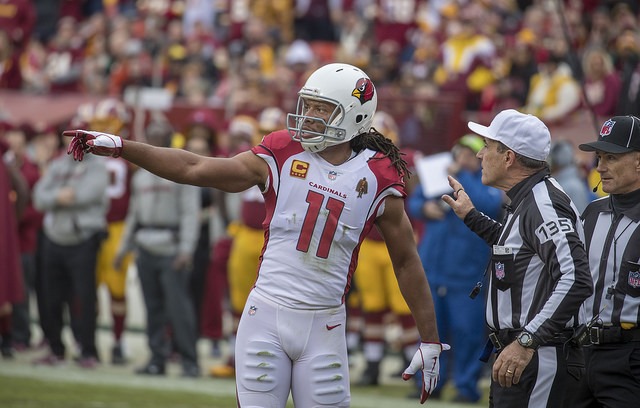 Draft season is beginning and while we typically advise against drafting this early, there are redraft leagues that have already gotten their teams in place! For those of you who have yet to draft, there are a few things to look at in terms of how to prepare for your picks.

The two main tools that I look at are Expert Consensus Rankings (ECR) and Average Draft Position (ADP). While many may make fun of how wrong the “experts” may be sometimes, the amount of research and statistical analysis that the gurus put in cannot be understated. The ADP lists help to see where everyone else is valuing players for the upcoming year. My goal when using these two lists is to see where the main differences are and why that may be. So lets take a look at a few differences between the ECR and ADP from FantasyPros for Full PPR leagues.

While a 9 draft pick difference may not seem like much, Fitzgerald provides the first full round difference in draft position. While the common fantasy player may simply look at the fact that Fitz is nearing the end of his career and that he no longer has Carson Palmer as his QB, the experts are looking at the stats. Even at 34 Fitz has averaged a 108/1131/7 line and has not finished outside of the top 10 WRs the past 3 seasons. He has had to deal with Drew Stanton as a part time QB with Carson Palmer’s injuries. Even with a new QB this year, Fitz remains the best and most reliable receiving target for whoever ends up being the starter. He also has a new coach and offensive coordinator this season. New OC Mike McCoy has consistently had top 10 passing offenses as an OC and HC. So, I don’t see a big decline in his production unless he gets injured. I have to side with the experts on this one. The aging WR has proven to be a reliable producer for fantasy managers over the last few years.

I fail to see how Golden Tate seems to continually be forgotten in drafts. With an average line of 93/1,056/5 over the last 4 years he has provided steady production and has been a consistent target for Matthew Stafford. Even with the possible increase in playing time for Kenny Golladay, I see that eating more into Marvin Jones production as a deep ball specialist and mid-route runner than to Tate who plays mostly out of the slot and relies on his yards after the catch for a lot of his production. If the Lions can finally get a running game going, it can help open up things for the passing game and Golden Tate. Again, I am with the experts on this one. If you can get him near the end of the 4th round, where his ADP is, you got a steal!

When it comes to Crabtree, I have to side with the drafters. I understand that Derek Carr did not have a great season in 2017, but Flacco threw for less yards with an extra game and on more passing attempts and completions. You may be able to blame that on the fact that Baltimore has had a hard time keeping WRs healthy the last few years. But you also have to put some of that blame on Flacco. Crabtree is going to a worse QB situation, with less receiving talent around him. I am more than happy to pass on Crabtree in the 5th (with guys like Chris Hogan, Emmanuel Sanders, and JuJu Smith-Schuster possibly available around the same time) and wait til the 6th or 7th.

This is one of the more drastic differences in Ranking to ADP of players who will be regularly drafted in leagues. I will admit that I probably find myself in between the two groups on Henry. He is a mountain of a man who has shown flashes of being a workhorse RB and who had to split time with DeMarco Murray the last two seasons. While Murray has retired, the Titans acquired Dion Lewis who led all RBs in rushing yards over the second half of the season. I can see a scenario where Henry gets a lot of the early down work and Lewis getting a fair share of carries with a lot of passing down work. At the same time, Lewis could eat into a lot of Henry’s early down work as well. Let’s not forget Lewis’ injury history having two ACL surgeries in his career. There is some risk/reward for Henry here and a lot of uncertainty as to how the roles will play out. Personally, I am avoiding Henry at his ADP, but I can also see some of the optimism coming from those who are drafting him.

With the exception of Aaron Rodgers ranked 8 spots below his current ADP, just about every higher level QB is being taken below where the Experts have them ranked overall. Wilson, Cam, Brees, etc. are all being drafted a 10-20 spots below their ranking by the experts. To me, this has more to do with draft philosophy. Many fantasy players are holding off on drafting QBs in order to make sure they load up on WR and RB talent. I tend to draft QBs late in order to get value guys in high volume offenses (Rivers, Stafford, Ryan). This only applies to single QB leagues. Leagues where you play 2 QBs at a time are a whole different animal that need a different draft strategy. There are still many gurus that will tell you to take a QB early (SkullKing’s Greg Talcott is one of them) but there is a growing trend all over the fantasy football world that is moving toward taking QBs later.