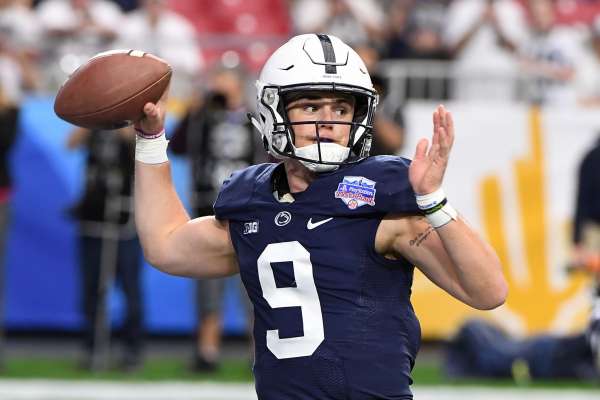 Trace McSorley is a very influential competitor with his team spirit, as well as being able to make some surprising plays with his legs as a runner. His positive team spirit tends to influence his teammates, and this is an example of the leadership qualities that he possesses. Because of his abilities with his legs, he has scored 30 rushing touchdowns through his collegiate career. In addition, these abilities allow him to execute read-option and RPO plays with incredible success. As a thrower of the football, he operates with quickness and has a compact release. Because of this combination of skills, he is able to roll out and throw the ball with accuracy quite easily. He is able to expedite his release in the face of pressure. McSorely also trusts his receivers to make plays, and is able to get set and uncork the football, throwing with anticipation when his receivers become open.

Because Trace McSorley’s frame is not the normal for an NFL quarterback, he has had more than a few passes batted down(11). With deep ball throws, he tends to overthrow his target, and this is exemplified by him only completing 39% of the deep down-field throws. In addition to this, he tends to struggle with throws into tight windows with moving targets. When he does need to scramble in the face of pressure, he tends to lose fundamentals and make quick decisions. This is due in part to his tendency to overreact to pressure at times.

With his combination of abilities as a thrower of the football as well as a runner, I can see success in Trace McSorley’s future. Of course his landing spot in the draft is going to be crucial to his success, but with the right coaching and guidance there is really no limit to him being a capable NFL quarterback. Although he is not a highly touted draft prospect, he could end up surprising the critics and find success if given the opportunity.