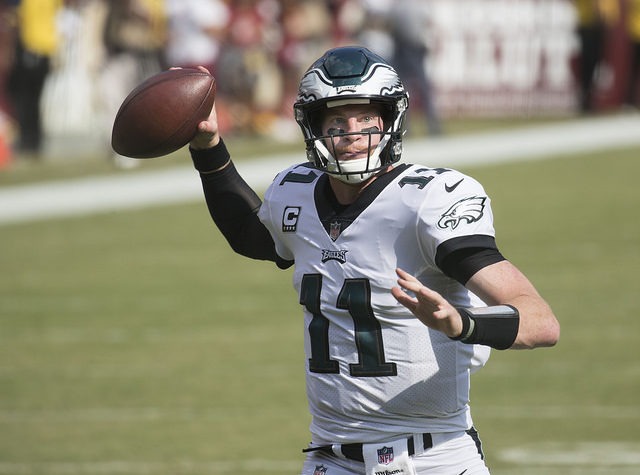 Being selected as the second overall pick in the 2016 NFL draft had come with very high expectations. The Philadelphia Eagles selected Carson Wentz with hopes that he will grow into a quarterback the franchise can put confidence in for many years to come. These expectations were truly being met through the first three seasons of his career; after his rookie season and him leading the franchise to a 13-3, then 9-7 finishing season record in 2017 and 2018 respectively. We are going to look at why some NFL fans believe he is injury-prone, how he is being perceived by other players in the league, and whether or not he is currently worth the draft risk for fantasy football GMs.

Wentz was sidelined at the end of each of these winning seasons (2017 and 2018) due to injury. Though he was unable to play in the playoff games that he along with his teammates led the franchise to due to injury, Nick Foles was his back-up and did the job particularly well. The Philadelphia Eagles had won the Super Bowl in 2017 and also won a playoff game in 2018 all behind the arm of Nick Foles. These feats earned Foles a long-term deal as a starting quarterback for a franchise that was looking for one, the Jacksonville Jaguars. The only way the Philadelphia Eagles would’ve let this happen, is they as a franchise have total confidence in Carson Wentz for well into the future. The franchise then proved their confidence by signing Wentz to a major extension, offering him the most “guaranteed” money in NFL history at $108 million.

The perception of Carson Wentz among players in the league has fallen greatly from season to season, but this fall was due to his durability and not being available at the end of the season. This perception can be taken heavily, but analysts, as well as the team itself, seem to be taking this outside perspective with a grain of salt. The skills and abilities of this player are obviously there, and the perception of his durability is simply just negative because he wasn’t available due to injury at season’s end.

We as fantasy football GMs now ask ourselves ” Is Carson Wentz worth the draft risk?” it is obvious that there are risks involved, especially in dynasty formats. However, as a GM you have to look for players to acquire when their perceived value is lower than what it should be. This can be seen as one of those scenarios, and the GM that takes a chance on him with his lower perceived draft value could end up reaping the rewards that his contract says he will produce.

In summary, the GM must make the final decision as to what is best for their team, and the decision to take Carson Wentz with his lower perceived value is definitely one of those decisions. This decision could end up leading your team to a championship this upcoming season, as well as early elimination. For Fantasy GMs who tend to draft QBs late and stream them throughout the season, Wentz is a great low cost high reward target. With his current re-draft ADP (Average Draft Position) being so low at 89, there is a lot of potential upside if he stays healthy. Remember the analogy of ”buy low, sell high” when you make the decision of whether or not Carson Wentz is worth the draft risk. I am, however, pounding the table for you to draft him at his low draft price.