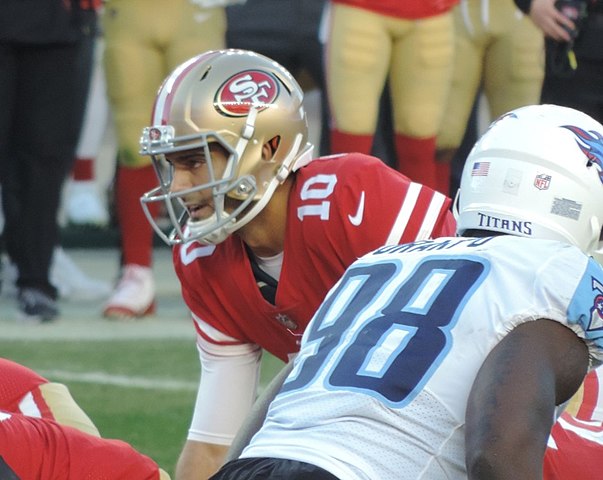 Jimmy G put on an absolute clinic last week, and will continue to build on momentum after a 3-touchdown performance in week 2. Faces the pathetic Steelers Defense week 3, which in ESPN leagues is averaging -0.5 fantasy points per contest. Start Jimmy G with confidence week 3 and reap the rewards of playing the Steelers.

Are you not on the Josh Allen hype train yet? You should: Allen faces the Bengals defense week 3, who just got gashed to the tune of 41 points to the 49ers in week 2. Allen has both a passing AND rushing TD in each of his first two games, throwing for at least 250+ yards in each contest. Snap him up off the waiver wire quickly, as savvy fantasy football owners are starting to notice the dual talents of Josh Allen.

On a Redskins team that is going to struggle to stay in games, Thompson is going to be utilized a lot in the pass game. He already has 18 targets through two games. With the defense giving up as many points as they are, the scatback should have plenty of opportunities to catch passes and provide flex appeal in PPR leagues.

Although the fifth year RB has not had many chances to run the ball in his career, he has made the most of those opportunities with a career 6.7 ypc. He also seems to be used more in the pass game than Matt Breida when they are both involved in the offense, making Mostert a solid PPR addition to the RB depth on your fantasy team.

Even though the Jaguars put just 12 points on the board against a questionable Texans defense, Chark still had a solid day in fantasy. Tallying seven receptions for 55 yards and a touchdown, he has clearly emerged as rookie quarterback Gardner Minshew’s No.1 option. He easily led the team in targets with nine, three more than the next highest receiver. If the Jaguars manage to run even somewhat of a competent offense whole Foles is out, Chark is definitely worth owning at a minimum, if not starting in some deeper leagues.

While Renfrow didn’t necessarily have the numbers to back it up this week with just four receptions for 30 yards, the signs were there that he could be a good value play moving forward. Despite finishing fourth on the team in receiving yards, he actually led the team in targets with eight. Waller had the most yards and Williams caught the lone touchdown, and while both of them figure to be big parts of the offense Renfrow looks like he’s going to slide into the starting slot receiver role for the rest of the season. Stash him on your bench now and monitor how his next couple of weeks go; if he does well, you’ll have gotten him before most people would have thought to go after him and if he struggles to find consistent production just cut him loose. As of now, he’s worth the roster spot.

We’re going with a duo here, as these two wide receivers are some of the more intriguing pick-ups in fantasy. With the absence of Tyreek Hill, Robinson and Hardman are filling the speedster role in the offense. However, the issue here is which one to add because at this point it’s essentially a coin flip. Both receivers had six targets vs. Oakland, with Hardman bringing in four for 61 yards and a score and Robinson snagging all six for a whopping 172 yards and two scores. While yes, Robinson did have a significantly better fantasy day, this will likely be his ceiling for the entire season. It will also be unlikely for both of them to have great games like they did this week with the presence of Travis Kelce and Sammy Watkins, but as long as Hill is out at least one of them has a decent shot of being fantasy relevant in that high-powered offense in Kansas City. Which one it will be is anyone’s guess, so just pick who you like the best and hope it’s the right call.

Dissly is emerging as a viable fantasy option, he wasn’t much of a factor in his rookie season and didn’t see much action in the opener, but in Sunday’s game against the Steelers he played an intricate part in the Seahawks offense. He caught all 5 of his targets and grabbed two touchdowns in the process. He may be able to pay large dividends throughout the season if you jump on him now.

After Witten’s exit from the broadcasting booth he still has some value in the Dallas Cowboys offense. He has a caught a touchdown pass in consecutive games this NFL season. He was on the field for 77 percent of the Dallas Cowboys snaps and was targeted 3 times in the red zone. He may not have huge stat totals but he is worth a look because of his touchdown potential.