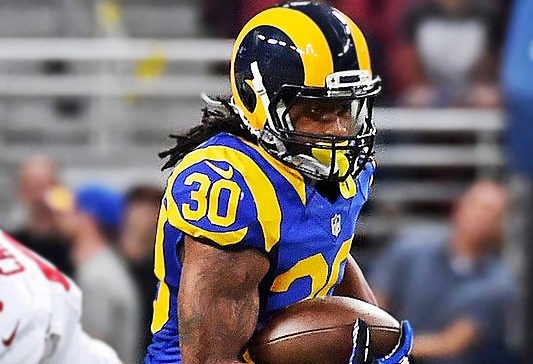 Todd Gurley so far this season, has been a top 15 running back in standard scoring leagues along with being #14 in PPR leagues, so the question is, can he finish this season as a top 10 running back?

Everyone knows Gurley’s knee worries, but through the first 5 weeks Gurley has proven himself worthy of a second round pick. Gurley has averaged 15.1 fantasy points per game in PPR formats, which is what he should be expected every week.

Gurley’s knee has limited him to about 75% of snaps as RB in the Rams offense when in previous years, he was on the field for about 90% in his previous years. The Rams are monitoring Gurley’s snaps as expected, and it is limiting his fantasy points… as expected. But this doesn’t mean Gurley isn’t a valuable back to own. In many leagues, Gurley is their RB2 which is perfect. Gurley still has plenty of scoring opportunities despite being on the field less (5 TD’s in 5 games) and he could still finish with around 15 TD’s on the year. This is a great asset to have especially if he’s your second RB on your roster.

If you look at last year’s top 10 RB’s, David Johnson, who ranked 10th in PPR leagues, scored 246.6 points (15.4 points per game) over the course of 2018. So if the 10th ranked player last year scored around 15 fantasy points per game, then Todd Gurley is certainly capable of it.

The only thing from keeping Todd Gurley from being a top 10 RB this season, is if he misses any games. He is currently doubtful for week 6, I highly recommend having Malcolm Brown and possibly Darrell Henderson Jr. on your roster as an important handcuff.

When you have a running back like Gurley, who is in an elite offense like the Rams, he always is capable of putting up fantasy points. He is no slouch in fantasy and he could be on a lot of championship rosters later this season.