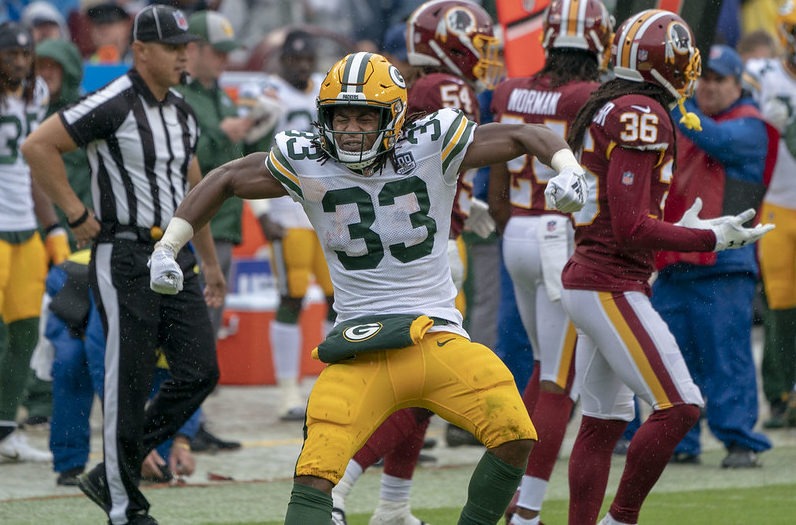 Aaron Jones went from having the game of his life in Week 5 against the Cowboys to being outplayed by Jamaal Williams and basically benched during the Pack’s Week 6 contest against their division foe, the Detroit Lions. Boy, that escalated quickly. Expectations were sky high for Jones coming off his 182 total yard and 4 TD performance against the Cowboys as Jones certainly took advantage of Jamaal Williams being forced to sit out week 5 with a concussion. Fantasy owners were surely licking their chops for Jones’ matchup with the Lions who give up an average of 23.8 points per game to opposing running backs.

Jones promptly fell on his face in week 6, turning 15 touches into just 60 scoreless yards and added a costly fumble to his stat line. To make matters worse, Jones dropped a wide-open touchdown pass in the first quarter. He then could only watch as his backfield mate Jamaal Williams turned 18 touches into 136 yards and a score.
While this looks terrible on the surface, it was just one game. During the four games in which both Jones and Williams were active (Williams missed virtually all of week 4 and was inactive for week 5 due to a concussion) Jones has out-touched Williams 66-51. However, Williams has out-touched Jones 32-26 in weeks 3 and 6 and has the backfield looking like much more of an even split than anticipated. The issue moving forward: can Aaron Jones be a trusted RB2?

Not only can Jones be trusted, but Williams has also thrown his hat into the ring as a weekly flex option. This is because of the Packer’s new run-first style offense with first year coach Matt LaFleur. The Packers’ offense has seen a significant uptick in rushing attempts from 2018 to 2019. For reference, the Jones and Williams combo recorded 254 rushing attempts in 2018. Through 6 games of 2019 they have already had 129 attempts—more than half of their 2019 total. I expect this trend to continue for the remainder of the 2019 season.

While the backfield may turn into more of a “hot hand” approach, I would not panic and try to bail on Aaron Jones. Jones certainly can’t be started with as much confidence as owners had going into week 6, but I would feel fine penciling Jones in as a weekly RB2 with RB1 upside. The coming weeks will tell the real story, but for now, in the words of Aaron Rodgers, R-E-L-A-X.