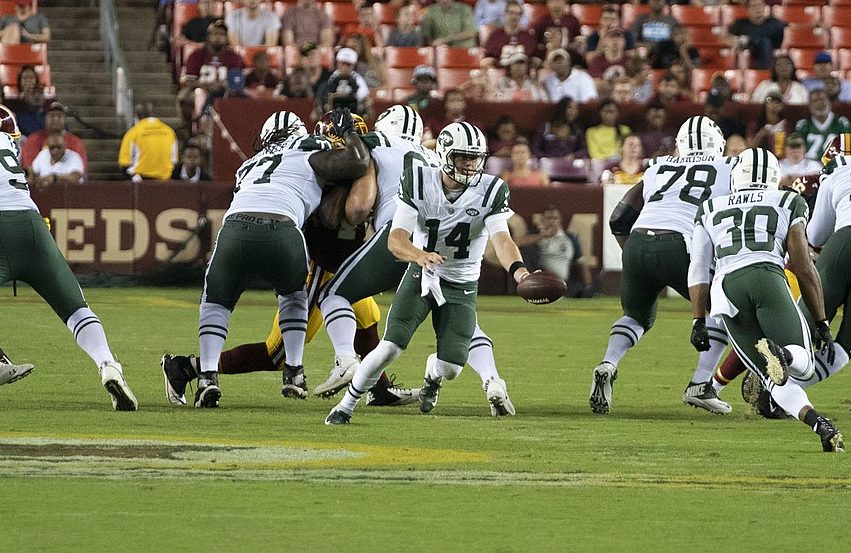 The Jets had a busy offseason, with general manager Joe Douglas using his first free agency to beef up his offensive line, add depth guys at positions of need and bring back some familiar faces on team-friendly deals. Now, with free agency all but over (depending on what happens with Clowney), it’s time for the attention to be turned to the draft.

After a 7-9 2019, the Jets pick No. 11 in the first round, which brings a lot of question marks with it. Ideally, the Jets draft an offensive tackle here. The Jets have used just one of their last 10 first-round picks on an offensive player – Sam Darnold – and the last time they used one on an offensive lineman was in 2006 when they took both Nick Mangold and D’Brickashaw Ferguson.

Yes, they did sign a bunch of offensive linemen, but the ones who are clear-cut starters were pretty much solely on the inside. As of right now, their tackle depth chart has free agent signing George Fant and last year’s third-round pick Chuma Edoga starting, neither of whom inspire too much confidence. And if one of them gets hurt, I don’t even know who they might throw out there. The Jets need a tackle, and they need a good one.

However, this is where a lot of the question marks come into play. Picking at No. 11, there is a chance that of the four top-tier tackles – Tristan Wirfs, Andrew Thomas, Mekhi Becton and Jedrick Wills – all of them could be off the board when they get on the clock. If any of them are available, the Jets need to go with whichever one of them they like the best, but if not, I don’t think they should reach for the next tier of tackles. There are two paths here that I would take: The first one that makes the most logical sense, and the second one fulfills another need while neglecting the offensive line.

Option No. 1 is trading down. If all four top-tier tackles are gone at No. 11, the Jets should think about trading down to the mid-20s, picking up more draft capital and then snagging one of the second-tier tackles. Option No. 2 is if they don’t do that, then I believe they should take Jerry Jeudy or CeeDee Lamb. I know, it would put their next chance to get an offensive tackle to selection No. 48 (barring a trade), but the Jets need a playmaker. Sam Darnold needs a star to throw the ball to, and at least one of them should be available at No. 11.

Realistically, I think one of the top-four tackles will be there, so neither of those options will need to happen.

At No. 48, the Jets should take an offensive tackle or wide receiver, whichever one they didn’t take at No. 11.

The Jets have two third-round picks, thanks to the Giants giving them theirs in exchange for Leonard Williams at the trade deadline. I wouldn’t be opposed to another tackle or receiver here at one of the picks, but the Jets do still have other holes that need to be filled, namely cornerback and edge rusher.

Pierre Desir was a nice addition but he should hardly be looked at as the solution. Brian Poole is the best one they’ve got, and he’s pretty much exclusively a slot corner. They need people on the outside to add to the likes of Desir, Bless Austin and others.

As for on the Edge, the Jets need someone that can get to the quarterback consistently. They had 35 sacks as a team last year, which was good for No. 23 in the league. Six of those came from safety Jamal Adams, who was second on the team and only two behind Jordan Jenkins. They need a force off the edge, so it wouldn’t be a bad idea to use one of the third-rounders on a pass rusher.

The Jets have four more picks on day three: A fourth, a fifth and two sixths. They can go in a lot of directions with these, but players at depth positions like wide receiver and cornerback wouldn’t be a bad idea. If they go the route of not getting a couple of tackles in the first two days, one more would also be a nice addition. A backup running back should also be considered, with the Jets being pretty thin on talent behind Le’Veon Bell.

The No. 1 priority for this draft should be offense. The defense was overall very good last season and they’re returning most of the same faces. The offense was one of the worst in the league. With a budding star in Sam Darnold under center, they need to do everything they can to help him develop. That means protecting him and getting him quality pass catchers.

This draft should be all about Sam Darnold.