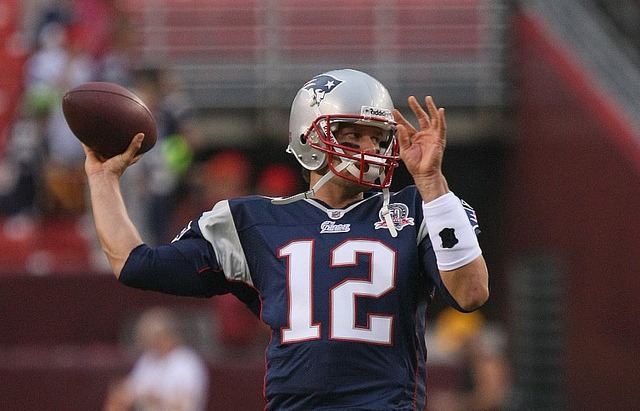 When it comes to quarterbacks’ fantasy values, there are several things we already know. For example, Patrick Mahomes and Lamar Jackson will be the top two quarterbacks taken in the fantasy draft, we should see an uptick in production from second-year guys Daniel Jones and Kyler Murray, and Deshaun Watson‘s value will take a major hit without DeAndre Hopkins to throw to.

But the biggest question mark at the position centers around Tom Brady who is now captaining the ship of the Tampa Bay Buccaneers. Trying to figure out Brady’s fantasy value next season is as difficult as trying to predict where the quarterback he took over for, Jameis Winston, will ultimately wind up.

Brady’s fantasy value has never been in question. Up until last season, he was top-10 in fantasy production among quarterbacks every season and helped his team to three Super Bowl rings and four Super Bowl appearances over the course of five seasons. He built two separate dynasties alone in New England. If you got Brady in the fourth round or later in a fantasy draft, you got a steal.

However, Brady ended 2019 in disappointing fashion. After starting 8-0 with five multiple passing touchdown games, the Patriots lost five of their last nine games, including a humiliating home loss to end the regular season against the Miami Dolphins. Usually a touchdown machine, Brady had just three multiple touchdown games over that closing nine-game stretch. Not one to throw interceptions, Brady threw four over the course of the final seven games and ended the season with two very subpar performances by Brady standards against the Dolphins and Titans in the playoffs.

Many have begun to question Brady’s age. Was this the beginning of the end for a soon-to-be 43-year old quarterback? Was Father Time finally taking its course? Or was Brady’s lack of production more a case of the Patriots wide receiving corps being at its weakest. Brady had no tight end weapons, and with Josh Gordon exiting New England mid-season, Julian Edelman was really the only guy Brady could rely on.

The answer is likely somewhere in between. Yes, Brady’s age is a concern when it comes to his fantasy value and there are enough signs out there that it started last year. But Tampa Bay has something that New England does not: wide receivers…and damn good ones.

Brady goes to Tampa Bay with arguably the best weapons in the passing game of any team in football. Mike Evans and Chris Godwin are both top-10 fantasy wideouts and tight ends O.J. Howard and Cameron Brate are a major upgrade to Matt Lacosse and Ryan Izzo. The Bucs also have some depth at the position with Scotty Miller and Justin Watson who are type of number 3 and 4 receivers that Brady excelled with in New England. They are clones of Chris Hogan and Danny Amendola. The Bucs will be a passing machine next year. They threw it a lot with Jameis Winston and had much success, except with 30 interceptions, and will throw it just as much with Brady. So those reasons alone are why you should love Brady’s fantasy value.

However, the Bucs still need to do some building around Brady. The Bucs offensive line has some holes and from all mock draft indications, they will look at spending a first round pick to find a tackle to protect Brady. They also need some help in the running game. It’s unclear whether Peyton Barber is returning and Ronald Jones was hit or miss last year. The Bucs could look towards adding a guy like Jonathan Taylor from Wisconsin in the second round to give Brady some help in that area.

Right now, I have Brady ranked right around 10 among fantasy quarterbacks, but that is a very cautious 10 which could drop if the Bucs don’t properly address the offensive line in the draft and the rest of free agency. If they do, I think Joe Theismann at his age could go out there and throw for 300 yards and a couple touchdowns with these weapons. I think Brady can overcome his age and have success because of who he has to throw to.

But Father time will come much quicker if Brady doesn’t have the time to get rid of the ball. The Bucs need to do what it takes to protect him. If they don’t, then Brady will be a bust with the Bucs and his fantasy value next season will plummet.

In other words, stay tuned.