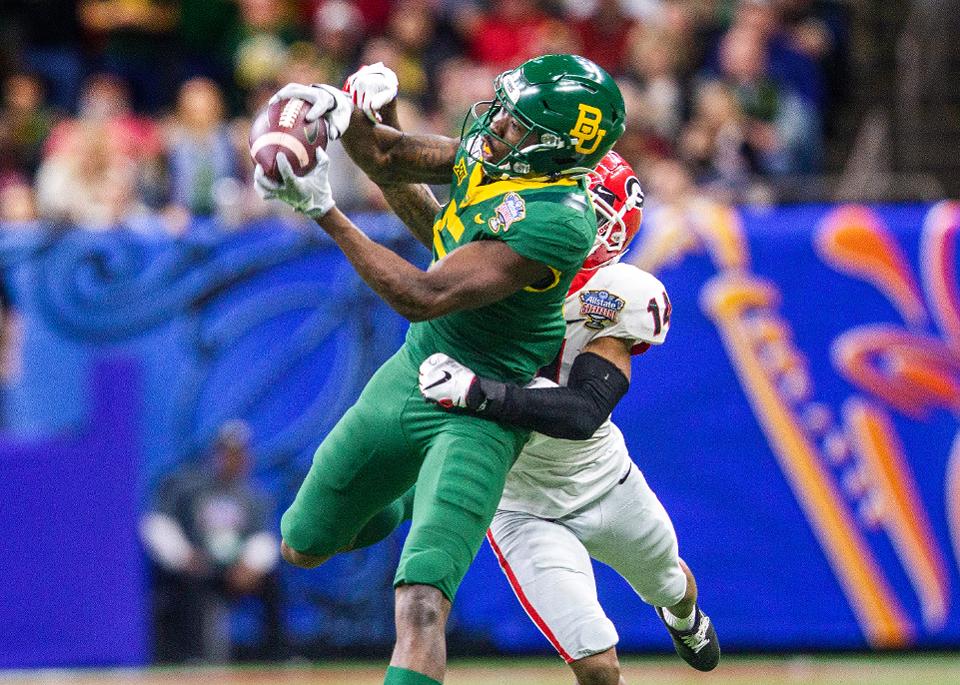 As we approach this year’s NFL Draft, many fans are still wondering which position group their team will target in the first round. However, for Eagles fans it seems that selecting a receiver bound for NFL stardom is the only option. With that pick, Baylor receiver Denzel Mims could really become the game-changing perimeter threat that Carson Wentz and the Eagles offense has long been in need of.

At 6’3″, 210 lbs Mims has every tool to become a dominant wideout at the next level. After receiving an invitation to the 2019 senior bowl, the former Baylor star quickly caught the attention of everyone there. Mims put on a show in 1 on 1 drills and was by far the best wide receiver during the week of senior bowl practices. He showed off his receiving talent while running the full route tree that he was never asked to do in college. Mims then continued to further impress scouts at the combine. After posting an official 4.38 40-yard dash along with a 38.5 inch vertical, he became seen as one of the draft’s top athletes without mentioning his 6’3″ frame.

Denzel Mims isn’t just an athlete though. While at Baylor, Mims was one of the nation’s best at catching the ball in the endzone, grabbing 28 total touchdowns through his 3 seasons as a starter. After putting up a 1000-yard, 8 TD season in his first as a starter, Mims had a down junior campaign although still finishing with 8 touchdowns and just under 800 receiving yards. His 2019 senior season was by far his best though, as he was the key offensive piece to the Baylor Bears 11-3 season. Mims concluded his final season with 1020 yards, and 12 receiving touchdowns while averaging almost 16 yards per catch, as he finished as the Bears best offensive player by a mile.

During his time at Baylor, Denzel Mims had some of college football’s most amazing catches, displaying his acrobatic ability to adjust mid-air. Watching his tape, it’s not hard to see how aggressive he is at attacking the football while it’s in the air. While he’s a freakish athlete, Mims also has extremely good footwork for his size, and uses it to create separation off the line. That, with his incredible length, shows how Mims consistently was able to beat the nation’s top defenders.

What really separates him from other big and athletic receivers though, is how easily he is able to locate the ball before the catch. When defensive backs are running along the sideline to keep up with him, Mims can regularly turn to track a back shoulder pass effortlessly. Overall, Denzel Mims is the total package for an NFL wide receiver, and with legitimate superstar potential, a pairing with a top offensive-minded coach like Doug Pederson could make the Eagles a top offense in the league.

So far this off-season it looks like Philadelphia’s scouting department is showing a lot of interest in the former Baylor playmaker. According to multiple sources, the two sides have met on video calls in the past, and Mims himself even said in a recent interview on KRZI’s ‘Matt Mosley show’ that the Eagles are one of the teams he’s talked with most.

After seeing what Carson Wentz was able to do with a receiver capable of taking the top off of the defense in DeSean Jackson‘s only game last season, the Eagles front office should be looking for someone with top-notch burners. There looks to be a good chance Denzel Mims would be available with the Eagles 21st overall pick if the draft’s consensus top 3 (Jeudy, Lamb, Ruggs) are gone by then. With the NFL draft less than two weeks away, rumors will start to heat up, but all we can do is wait until draft night to see who Philly’s selection will be.