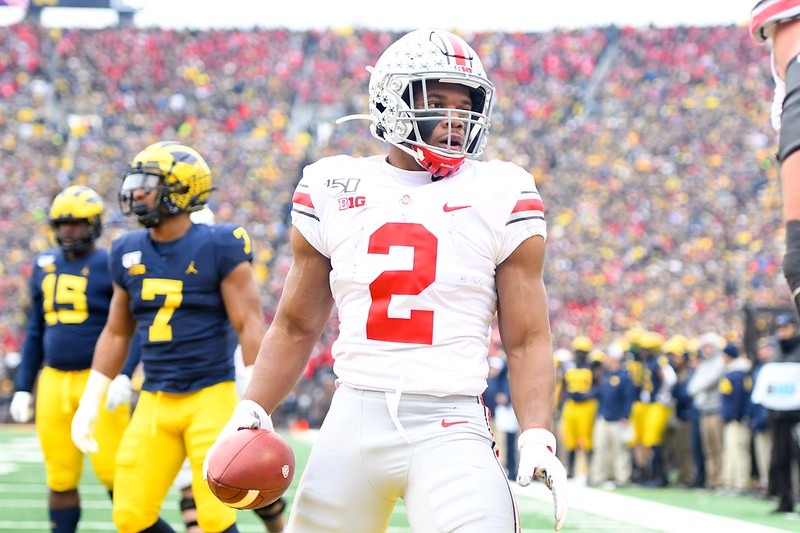 by Thomas Barnett and Brady Power

This NFL off-season has created even more anticipation of the NFL Draft given the status of sports due to the COVID-19 pandemic. There were few teams more intriguing to monitor as the off-season transitioned from free-agency towards the draft. Beyond an amazing sophomore campaign for Lamar Jackson and company, this was also the sophomore campaign for the Ravens to draft without Ozzie Newsome. It appears that Newsome left behind some notes, because the Ravens have been touted as one of the leading candidates for the best draft in 2020. While it will take a little time to determine how good this draft class will really be, take a look at the selections and how they help Baltimore.

The Baltimore Ravens opened up their 2020 NFL Draft by filling a much-needed hole on the defense with linebacker Patrick Queen. After letting CJ Mosley walk following the 2018 season, the Ravens had a noticeable deficiency at linebacker during last season’s biggest games. After losing one of their best contributors at the position again, Patrick Onwuasor, the Ravens had to fill the void. After watching the likes of Isaiah Simmons (Cardinals), Kenneth Murray (Chargers), and Jordan Brooks (Seahawks) get drafted, Queen fell to Baltimore near the end of the first round. Queen became only the third linebacker selected by the Ravens in the first round, with Ray Lewis and CJ Mosley being good company.

Ravens pick up a leader from the LSU defense

Baltimore drafts LB Patrick Queen with the No. 28 pick in the #NFLDraft

Patrick Queen is somewhat of a new name for football enthusiasts as he spent time shadowing now-NFL linebacker Devin White, who was a first-round selection in 2019. Queen stepped in nicely, earning defensive MVP honors during LSU’s National Championship victory over Clemson. Queen was a force behind the line of scrimmage, amassing 17.5 tackles for a loss and an additional four sacks. Queen is listed as a middle linebacker, however, he is rangy and versatile with 4.5 speed. At LSU, Queen played primarily in a 3-4 scheme, which is what Baltimore technically uses, though Wink Martindale often changes the structure of the defense throughout each game. Expect Queen to be a nice fit at a good value.

In round two, the Ravens added to the NFL’s leading rushing attack. With questions surrounding the longevity of lead-back, Mark Ingram, the Ravens had one of 2020’s best rushing prospects fall into their lap. It was a no-brainer. For reference, many experts had Dobbins ranked as the #1 back of the draft, while virtually all experts had him in their top-3. The Ravens snagged Dobbins as the fifth back to come off the board. With the selection, it appears imminent that Dobbins immediately jumps to second on the depth chart. Who better to work with than Big Truss?

At Ohio State, Dobbins was a significant producer in the running game all three years, with increasing production each year. During his final season, Dobbins breached the 2000-yard mark for the first time in Ohio State history, besting Eddie George, Ezekiel Elliott, and Carlos Hyde. While a little on the smaller side (201lbs), Dobbins recorded the highest SPARQ score amongst running-back prospects in 2020, so his athleticism should make up for any lack of size. With a little time to shadow behind Ingram, the dynamism of the offense, and clear talent and athleticism, the Ravens’ second pick of 2020 should carve out a nice role for Baltimore for years to come.

After a double pick exchange with the New England Patriots, the Ravens got back on the board in round three to continue adding depth to the front seven with Madubuike. It has been clear that the Ravens prioritized rebuilding the defense this offseason, as mentioned in our previous article. With the way Baltimore rotates their line, Madubuike should be a nice addition to newcomers Derek Wolfe and Calais Campbell. Listed at a similar weight to Campbell but five inches shorter, he has the potential to be a nice plug for the interior or edge on the line.

In college, Madubuike averaged 5.5 sacks per year over his final two years. While modest, it’s rare to see a tackle far exceed these numbers. The former US Army All-American also recorded 11.5 tackles for a loss in his final college year. His best performances came against the best opponents. Many scouts saw Madubuike as a second-round level talent and within the top three defensive tackles on the board. Like Dobbins, he was the fifth taken. Another quality player that fell into Eric DeCosta’s lap.

Baltimore’s second pick of the third round was another nice selection that filled a void in one of few weaknesses. The Ravens spent some draft capital on receivers in 2019 but still seemed a little thin outside the numbers. Duvernay is somewhere between the size of Hollywood Brown and Miles Boykin, so he should be able to move in and out of the slot. Not for nothing, but Duvernay could also be another upgrade in his blocking ability compared to Brown.

While a little quiet his first few years, this explosive wide-out found his groove his senior year, finishing Top-5 nationwide with 106 receptions. He averaged a solid 13.6 yards per catch. Did I mention that he ran a 4.39 40? Another explosive player for an already-electric offense. It was anticipated that Duvernay landed in round three, so the price was right.

Coming on the back-end of the trade exchange with New England was another LB to help strengthen the defense. Harrison is an interesting pick for Baltimore because he is quite different from their earlier pick on Patrick Queen. Harrison is a little bigger at 6’3″ and 247lbs and a little slower with a sub-4.7 40.. He was a solid contributor for Ohio State and projects to be valuable at the next level.

Malik Harrison is a little more of your prototype middle linebacker that fits a 4-3 scheme. While we know that Baltimore predominantly uses a 3-4, there will be times when Wink can take advantage of a big slugger in the middle. Harrison is consistently touted as an aggressive, hole-plugging, disruptive machine at his position. Surprisingly enough, he was a quarterback throughout his high school career. It will be interesting to see if and how he performs with coverage duties.

To finish out round three and day two of the draft, the Ravens picked their first offensive lineman being Tyre Phillips. The team knew going into the draft they needed depth at the Guard position due to the departure of Pro Bowler Marshal Yanda. With Ronnie Stanley and Orlando Brown Jr. holding down the two Tackle positions, it is likely Phillips will be competing with Ben Powers for a possible shot at Yanda’s spot. Otherwise, Phillips is a very solid 2nd string behind Stanley.

At Mississippi State, Phillips was a brick wall for the offense standing at 6’5” and weighing in at a whopping 345 lbs. Phillips’ ability to block and run downfield in the running game is perfect for the Ravens, considering they had the #1 rushing offense in the NFL last year. However, despite having great hands and decent athleticism for his size, Phillips only has one year of consecutive starts through an entire season in college which reveals a lack of starting experience going into his rookie season. Overall, the Ravens got a solid third-round pick in Phillips who has the potential to be a fitting replacement to Yanda.

With their first pick in round four, the Ravens welcomed their second offensive lineman from the draft in Ben Bredeson. Having drafted OT Tyre Phillips the round before, the team looked for more depth at offensive line to get the best possible replacement for Marshal Yanda. The RG position could now fall to Powers, Phillips, or Bredeson depending on who is up for the challenge come September.

Despite Powers and Phillips being great options for the position, Bredeson is someone who should not be overlooked as a result of when he was drafted. The 6’5” 325 Ib Guard was a four-year starter for Michigan and played numerous snaps against some of the best teams college football has to offer. Bredeson’s physicality and durability make him a good candidate for the Guard position in the long run for the Ravens. His stable structure and ability to make post-play reads would make him a strong pass protector for Lamar Jackson. However, Jackson is known to scramble which does not play into Bredeson’s game as he has limited athleticism and ability to move downfield. Changing directions and blocking for the run are major weaknesses the Ravens will take into effect. Despite these flaws, however, Bredeson still serves as an experienced pass protector the Ravens could use this coming season.

Having drafted Madubuike earlier in the draft, the Ravens looked to DT again with the selection of Broderick Washington Jr in the fifth round. Washington, who stands at 6’3” and weighs 305 Ibs, is a good late-round selection by the Ravens to fill the back-up role with talent. Having been a three-year starter at Texas Tech, the 170th pick recorded 5.5 sacks and 12 tackles for a loss in his junior and senior seasons making him viable for some playing time in the 2020 season.

Even though Washington is listed as a NT for Baltimore, he also has experience as an edge rusher which the Ravens could utilize in the future. In addition to having an NFL-ready height and weight, Washington is also great at reading and reacting to opposing offenses which makes him fairly effective. However, Washington never had great numbers in college despite physical ability and also often fails to reset after trying to get by blockers which are some weaknesses the Ravens have to take into account. Overall, Washington is a solid late-round pick who serves as a back-up to the considerably talented defensive line.

Accompanying Duvernay, the Ravens brought in a second wide receiver amid the sixth round being James Proche. Proche, who is a smaller receiver at 5’11” and 193 Ibs, is an additional receiver that the Ravens can utilize in the slot. During his senior season, Proche racked up 111 receptions, 1,225 yards, and 15 touchdowns which shows great production and likely is why the Ravens were so interested.

While demonstrating great production, Proche also has great hands and a wide catch radius. This allows him to make razzle-dazzle plays as he showed in college. The SMU grad is fantastic on short routes displaying good speed and agility to go along with his hands. Yet, Proche is not exactly a deep threat making him only useful in the slot, and press coverage has shown to neutralize him in college which poses big questions about his effectiveness in the NFL. James Proche is another acceptable player the Ravens could utilize in the 2020 season.

The final Raven to join the flock out of the seventh round is safety Geno Stone. Now associating with the likes of Earl Thomas, Chuck Clark, and Anthony Levine Sr., Stone is a welcome addition to the team having 46 solo tackles and 70 total in his junior year. Stone, while not a huge DB at 5’10’ and 210 Lbs, is a solid backup to Chuck Clark at the strong safety position.

At Iowa, Stone showed sparks of talent being a great hitter and tackler with heads up plays in Cover 2 zone. His angles when tracking down runners are very refined which complements his great tackling ability. Despite this, Stone does lack size and has struggled in the past when going up against taller receivers. While good in zone coverage, the safety does not have a lot of experience in man, and had a 40 time of 4.62 at the combine which points to possible weakness as an NFL safety. Being a seventh-round pick, there are not many expectations coming out of Geno Stone, but he does show promise to be a solid safety for the Ravens in the future.

Overall, the Ravens had a great draft filling many holes both on offense and defense which should refine the team and lead to a superb 2020 season.