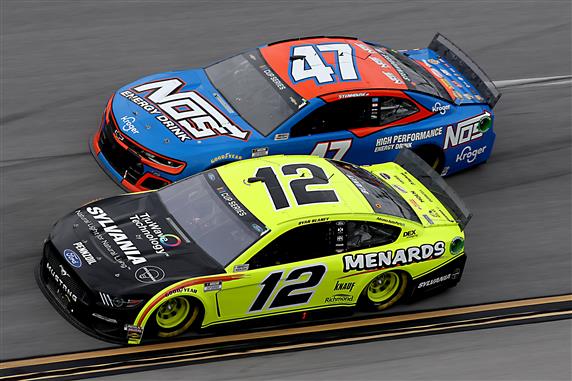 An event that began with a massive show of support for Bubba Wallace ended with one of Wallace’s best friends, Ryan Blaney, celebrating in Victory Lane for the second straight race at Talladega Superspeedway.
In a frenetic overtime dash, Blaney won Monday’s GEICO 500 by .007 seconds over Ricky Stenhouse Jr. as crashing cars bounced of each other and the outside wall behind the top two finishers. The victory was Blaney’s first of the season, second straight at the 2.66-mile track and the fourth of his career.
It was a day that started ominously—and not because of the rain clouds that threatened to delay the race for a second straight day and in fact caused a stoppage of 57 minutes, 18 seconds after 57 laps were complete on Monday.
News that a noose had been discovered Sunday evening in the garage stall of Wallace, the NASCAR Cup Series’ only African-American driver, dominated national headlines and brought strong statements of condemnation from both NASCAR and team owner Richard Petty.
Drivers and their crews assembled before the race to escort Wallace and his car to the head of the grid. The lasting image of the pre-race was Wallace being embraced by a succession of his fellow competitors.
Nearly five hours later, Wallace was congratulating Blaney in Victory Lane after a scintillating conclusion that saw Blaney knocking the Toyota of Eric Jones into the outside wall as the cars approached the finish line—and still managing to beat Stenhouse to the stripe by roughly 12 inches.
“I just kind of blocked, just trying to block the best we could,” Blaney said. “Ride the top, ride the bottom. The 20 (Jones) got to my outside, and I tried to go up there to slow him down and… I’m not sure, I don’t know… three-wide, I hate that I hit him, but just kind of trying to beat and bang to the line and things like that.
“We just edged it out, but I’m really proud of this whole Menards/Sylvania Ford Mustang team. It’s been a cool year so far, and I’m really excited to get our first win of the year at a cool place. Thank you everybody for coming… That was a lot of fun.”
Ford drivers have won nine of the last 10 Talladega Cup races.
Aric Almirola slid sideways across the finish line to claim third place, with Denny Hamlin and Jones following in fourth and fifth, respectively. Chris Buescher, Alex Bowman, John Hunter Nemechek, Kurt Busch and Kevin Harvick completed the top 10.
Wallace, who spearheaded efforts within the sport to ban the Confederate flag from NASCAR events, climbed from his car after a 14th-place finish and saluted fans who gathered at the catchfence to greet him. As the next phase of the reopening of the sport, 5,000 fans were allowed to attend the race.
“The sport is changing,” Wallace said, as he stood in front of the first grandstand. “The deal that happened yesterday… I wanted to show whoever it was that you’re not going to take away my smile. I’m going to keep on going. I’ve been a part of this sport for a really long time…
“All in all, we won today. The pre-race deal was probably one of the hardest things I’ve ever had to witness in my life, from all the supporters, from drivers and crew members and everybody here. It’s truly incredible, and I’m proud to be a part of this sport.”
Stenhouse said that the fans were chanting for Wallace before the start of the race, loud enough for the drivers to hear it on pit road.