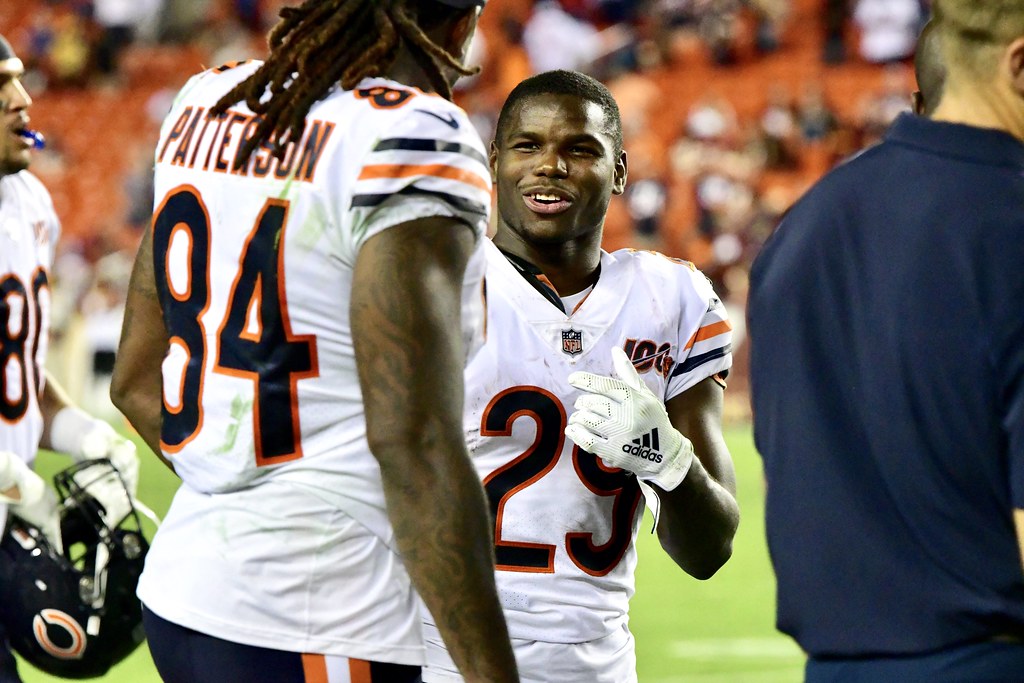 The former Arizona Cardinals’ Head Coach had this to say following a Week 6 Monday night comeback by the Chicago Bears in the 2006 season. The Bears were 5-0 at the time and looking like legitimate contenders. The Bears fell to a 20-0 hole against the Cardinals but came back to win 24-23. 14 years later, the Bears found themselves in a similar situation. A Week 7 Monday night matchup with the Bears going against another NFC West opponent, the Los Angeles Rams. The Bears sitting at 5-1 heading into the matchup also fell into a hole 24-3, but were unable to escape with another Monday night comeback.

The Bears fell to the Rams 24-10 following yet another poor performance by the Bears offense. Nothing was working against a tough Rams’ defense which has playmakers at every level of their defense. Play action, runs, Quarterback under center, Quarterback in the shotgun, no huddle, hurry up offense, etc. were all unable to get a Bears offense to produce sustainable drives and points. The Bears are what we thought they were.

.@AaronDonald97 breaks through for his 8th sack of the season. #RamsHouse

The Bears were out played in every aspect of the game, however the biggest difference was the performance in the run game. The Bears only produced 49 yards on 17 carries while the Rams gained 161 yards on 34 carries. Jared Goff had an efficient game, his best against the Bears defense going 23-33 for 219 yards and 2 scores. Nick Foles on the other hand finished 28-40 for 261 yards and 2 interceptions.

The Bears defense played well for most of the game, up until the middle of the third quarter when the defense clearly looked tired. The Bears were unable to get to Jared Goff with the exception of a Khalil Mack strip sack. The Bears were able to apply some pressure on Goff, however the Rams still tired out a normally stout and disciplined Bears defense. The Rams defense on the other hand were all over the Bears offense. The defensive front of the Rams, led by Aaron Donald, were able to sack Foles 4 times, and prevent the Bears from gaining any yards on the ground. The Rams secondary also generated turnovers in the form of a tipped pass in the endzone, intercepted by Taylor Rapp, and an interception by Jalen Ramsey.

The Bears continue to struggle offensively, struggles that have harmed the Bears all year. Sitting at 5-1 prior to the game, not many people in the media took these Bears seriously. Jokes were made about the Bears being the worst 5-1 team in the league, maybe even history. It was well known and well documented that the Bears had offensive struggles, a Quarterback change does not seem to make much of a difference. However, week after week we have been waiting for the Bears to show us what this offense can do, to show the rest of the league that the Bears can do more than enough offensively to beat tougher opponents. Monday was the national stage for the Bears to potentially showcase this and they failed. The Bears are what we thought they were.

Following the Bears breakout in 2018, Mitch Trubisky was looking like the Quarterback of the future for the Bears, Coach of the Year Matt Nagy looked to be one of the brightest offensive minds in the game, and the defense was built to compete for championships. Outside of the defense remaining among the best in the league for the last 3 years, the Bear offense has continued to back track.

Following an 8-8 record in 2019 the Bears needed to run the football and improve the offensive line. In 2020 the Bears can not run the football because it starts with the offensive line. The current line for the Bears is not healthy, with James Daniels out and Cody Whitehair now hurt. Even when healthy this line was able to do just enough. The Bears looked reborn being able to run the ball much improved at the start of the year, but week after week this production has slowed and now it is impacting Quarterback play.

In the matchup against the Rams, QB Nick Foles had open receivers, notably a wide open Darnell Mooney on a double move, however Foles was unable to connect due to pressure by the Rams defense.

Specifically on that play, there is something that Chuck Pagano can take away from that. The Rams defense utilized Aaron Donald on that play to where he wasn’t the one getting the pressure, but he took a lot of the focus of the protection scheme on that play which ended up disrupting the throw. The Rams knew the Bears were going to double team Aaron Donald, as any team should, and they blitzed the DB off the opposite edge while the Bears didn’t have an extra blocker, and they were able to get pressure with only sending 5 against 5 blockers. This is just a good football play by the Rams because it forces the Bears to either block 6 against 5, or leave Aaron Donald one on one with the offensive lineman.

Chuck Pagano typically only sends 4 which means Khalil Mack will often get double teamed. If he were to orchestrate a blitz sending someone such as Buster Skrine off the edge, who has great speed, it would be easier for Mack and the Bears defense to generate more pressure and sacks. Although Mack is in the top 5 in sacks this year, the Bears defense ranks 14th in the league with 16 sacks.

The Bears defense also needs to clean up their play. They lead the league in First Downs by Penalty with 27 which is 4 higher than the Saints in second with 23. The Bears are also 3rd in the league in penalties and penalty yards.

Although the defense didn’t statistically play well, it should definitely be noted that it is significantly harder to play defense when you are on the field too much (from the offense having to punt frequently and short drives), and when you are having to start your drive from almost midfield. This makes it harder to get a stop within the drive and the lower the defense’s stamina is, the harder it is to get a stop and make tackles. The Bears offense only got 14 first downs compared to LA’s 24 and LA had the time possession advantage of 32:35 to 27:25.

The Bears were dominated in the field possession aspect and in special teams, specifically in punts. Johnny Hekker dominated the punt game, pinning the Bears inside their own 10 on 5 different occasions. This forced the Bears offense to have to drive the whole field to score, and we all saw how that wasn’t going to happen. The Bears only crossed midfield THREE times and made it to the redzone on two of those occasions. And neither of those redzone possessions ended up in even a field goal. As Nick Foles threw a pass that was tipped and picked, and the other was when the Bears were forced to go for it on 4th and goal, and were unable to convert.

One feel-good takeaway we can get from this week’s game on defense is that Eddie Jackson finally gets in the endzone. If you remember in the previous games this year, Eddie Jackson has had 2 touchdowns taken away due to penalties, but for the only Bears TD of the game, Eddie Jackson got a scoop-and-score in the fourth quarter which made the score 24-10.

To address a headline that Brain Griese said during Monday Night’s broadcast, Griese stated that Nick Foles said, “Sometimes play calls come in, and I know that I don’t have time to execute that play call, and I’m the one out here getting hit, and sometimes the guy calling the plays, Matt Nagy, he doesn’t know how much time there is back here.”

The offense has shown an inability to stay on the field and this has the trickle down effect on the defense, having to remain in the game longer while other offenses can sustain drives and minimize the rest that the Bears defense gets on the sidelines. The Bears defense, usually disciplined, is the most penalized defense this year. Staying on the field has a lot to do with this. Any improvement for the Bears on the offensive side of the football begins with the offensive line, the Bears need to make changes at the line over the next few years. Maybe a complete overhaul with the exception of Cody Whitehair. The next thing is the play calling. At this point, Nagy is no longer cutting it as an offensive play caller. He remains one of the best head coaches in the league, a players coach, but he has shown great inconsistency with play calling. The other key thing tied to play calling is personnel usage, Cordarrelle Patterson being used as a running back on 4th & 1 is as predictable as it can get for this offense. The Bears play calling has become too predictable and defenses across the league have figured out Matt Nagy.

Other important takeaways for the Bears that could become bright spots is Cole Kmet and Darnell Mooney. Both players have shown the ability to be vertical threats in an offense without much of a vertical game. Cole Kmet has a large body with a great vertical for jump ball situations and good speed off the line. In last night’s game Darnell Mooney has shown the speed to beat anyone, even in double coverage. The Bears need to expose this against defenses moving forward if they want any improvement on the offense in the short term. Jimmy Graham will likely remain the #1 TE on the team for his ability in the redzone, but expect the Bears to utilize Kmet in greater capacity in the passing game moving forward.

Things don’t get easier for the Bears in Week 8, as the Bears take on Drew Brees and the 4-2 Saints. The next couple weeks also include matchups with previously undefeated Titans and tough division matchups against the Vikings, and the Packers in Week 12, following the Week 11 Bye.

The Bears are what we thought they were.