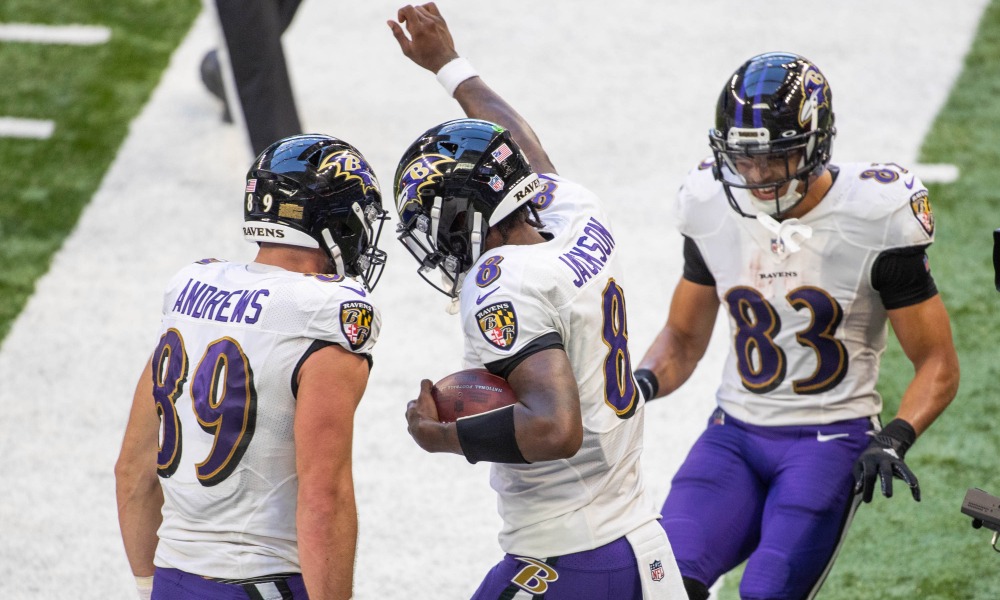 It wasn’t the prettiest, but the Ravens beat the Titans 20-13 on Sunday and are now moving on to the divisional round of the playoffs. The Ravens ended their two-year streak of first game playoff exits as Lamar Jackson and company, while not perfect, did what was necessary to win. Let’s take a look at the Ravens’ first playoff win since the 2014 season…

Early in the game, the Ravens offense showed signs similar to those earlier this season when they couldn’t get anything going. After the first quarter, the Ravens were in a 10-0 deficit despite having the ball twice. A punt and an interception by the Ravens led many to believe this was going to be another Titans slaughter-fest, but the Ravens punched back—hard.

After the early interception, Lamar Jackson had success throwing 17 for 24, with 179 passing yards, 0 touchdowns, 136 rushing yards, and 1 rushing touchdown. Even though Jackson didn’t have any passing touchdowns, it should still be noted he was effective passing the ball during most of the game.

The Baltimore running game, besides Jackson, was not as unstoppable as it was the past few weeks, but was still effective getting first downs and scoring on the goal line. J.K. Dobbins led the backfield in carries with 9 for 43 yards and a touchdown. Gus Edwards acquired 8 carries for 38 yards, with some big powerful rushes to gain first downs. While not as destructive as usual, the running game on the back of Lamar Jackson still kept the Titans defense on their toes.

The Ravens receiving core in this match-up had a similar performance to how they’ve been playing all year. One or two receivers gain most of the targets while everyone else is in the background. Marquise Brown had a HUGE game with 7 receptions for 109 yards. It was good to see Brown catching most that came his way and utilizing his speed to gain some RAC (run-after-catch). Mark Andrews was not a target as much in this game with only 4 receptions for 41 yards. Patrick Ricard came up with 3 crucial receptions. With the exception of Brown’s performance, the Ravens receivers were very underwhelming. This game provides further proof the Ravens need to draft or acquire a big receiver that can get open and make catches.

Leaving behind individual performances, the play-calling on certain offensive drives was questionable. As stated earlier in the season, the majority of Lamar Jackson’s highlight runs were from the pocket breaking down on passing plays, NOT designed runs. Against the Titans, nearly every QB designed run was stopped for negative yardage or gained a yard or two. The Ravens need to give Jackson more opportunities to throw, and if no one is open, let him run it and pick up big yardage on the ground. Next week, the Ravens have to move away from the designed runs or they will be inconsistent once again. This play-calling will not lead to a victory against a team like the Bills.

Outside of a rough first quarter, the Ravens defense was stellar. Early on it appeared covering A.J. Brown was going to be a problem, but the D settled in and completely shut-down the Titans for the rest of the game.

The defensive line certainly dethroned Derrick Henry as the king, only allowing 40 rushing yards on an astonishing 18 carries. That’s 2.2 yards per carry against one of the best backs in the entire league!

The defensive line, middle linebackers, and secondary were all on par and are the true reasons the Ravens won this game. With 1 sack, 4 tackles for a loss, 4 pass deflections, 5 QB hits, 1 interception, and only 209 yards of total offense given up, the Ravens D was simply phenomenal. The Ravens’ control of the line of scrimmage was crucial. This had been their biggest struggle all season and they had to stop Derrick Henry to win.

A late game Marcus Peters interception was the cherry on top of a timeless performance by the defense. After the pick, the Ravens stomped on the Titans midfield logo as payback for the Titans’ pre-game antics back in Week 11. It was a satisfying day for Ravens players and fans.

With this Wildcard win, and the Browns win over the Steelers, the Ravens will be playing the Bills at Orchard Park in primetime next Saturday. This is an intriguing match-up given the last time these two teams played, the Ravens beat Josh Allen handedly.

If the Ravens stick to the successful play calls on offense and maintain control over the line of scrimmage on defense, they have the ability to dominate the Bills.